Baby Boomer Investors are Not all the Same 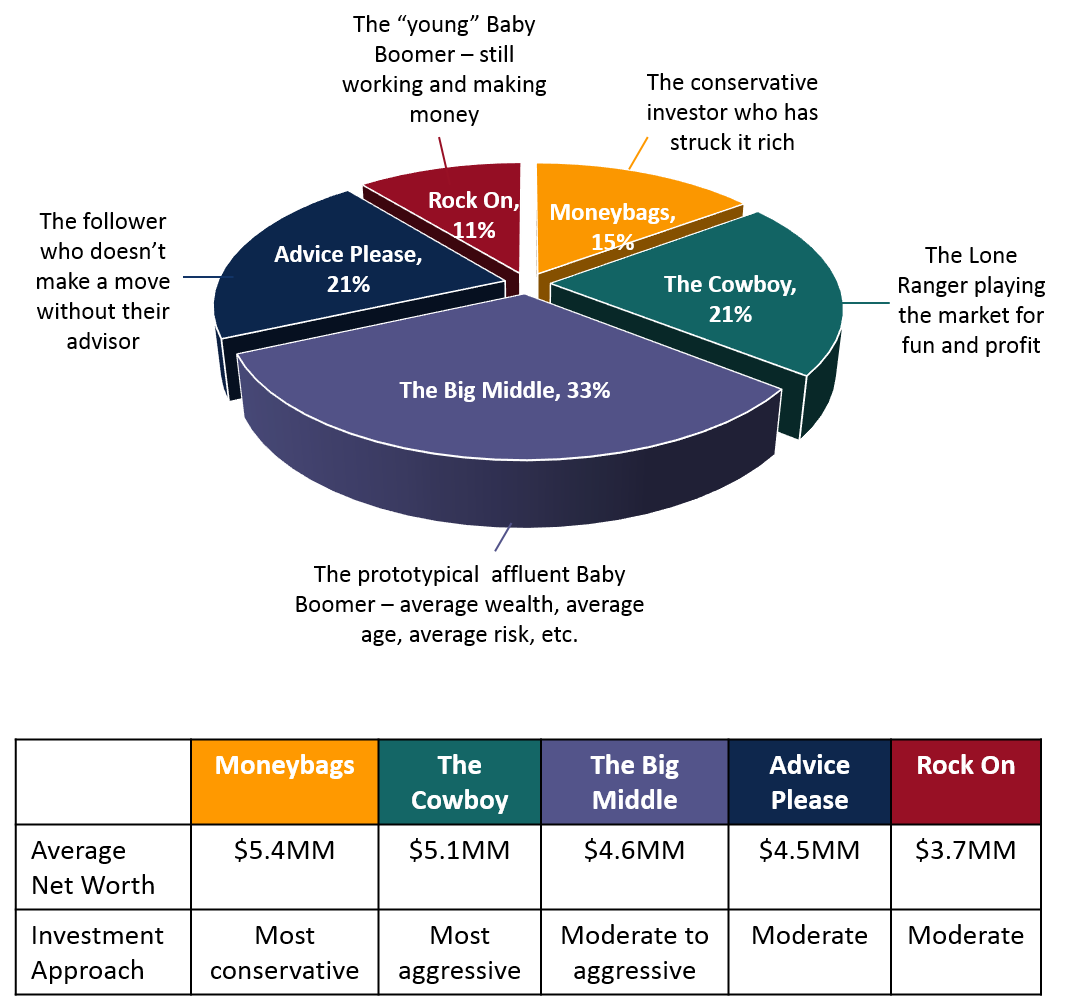 Baby Boomers represented 26 percent of the US population at the end of 2014, or about 75 million individuals, according to the Census Bureau.  They control a significant portion of the investable assets in the U.S. economy and their habits, behaviors and personalities impact the financial markets.  They also comprise the largest percentage of investors to currently rely upon financial advisors. As such, they remain a potent business-building opportunity for financial providers and their advisors.

Baby Boomers are of particular interest to financial providers as they are where the money is. Nine-in-ten (92 percent) of Ultra High Net Worth households with a net worth between $5 million and $24.9 million are ages 55 and up. Eighty-five percent of Millionaire households and 71 percent of non-Millionaires with a net worth of at least $500,000 are also at least 55 years-old.

How does one describe the Baby Boomer investor? Can they all be lumped together under the Boomer banner? A new Spectrem Group White Paper, Baby Boomer Investment Personas, identifies five primary Baby Boomer investor character types that run the gamut from self-directed to advisor-dependent.

What emerges from Spectrem Group research is that there is no such thing as a “typical” Baby Boomer investor. The highest percentage (33 percent) fall under the category of what we call the Big Middle. They represent the prototypical affluent Baby Boomer. From wealth level to age and risk tolerance, they can be said to be resolutely average. The Big Middle Baby Boomer investor professes to have a moderate risk tolerance, but because they are confident in their financial knowledge, they can be somewhat adventurous or diversified in their investment interests.

Speaking of adventurous, here comes the Cowboy, who comprise 21 percent of surveyed Baby Boomers. This male-dominated segment is the 2nd wealthiest segment. Almost two-thirds (63 percent) of Cowboys consider themselves “very” knowledgeable about investing and financial products while 68 percent believe they can do better than an advisor in managing their portfolio. The Cowboy self-reports being an aggressive investor with a higher than average risk tolerance.  Nearly 60 percent are invested in stocks compared with 39 percent of surveyed investors in this demographic.

An equal percentage of Baby Boomer investors fall under the category Advice Please! Consider them the anti-Cowboy. They see themselves mostly as only fairly knowledgeable or even not very knowledgeable about investments. They tend to not make an investment move with consulting their financial advisor or a financial professional, and have more professionally managed accounts than any other Baby Boomer segment.

And then there is the Baby Boomer investor we call Moneybags, who represent 15 percent of this demographic. Moneybags is the wealthiest and most conservative of their counterparts. They are slightly more likely to be female. Six-in-ten report having a moderate risk tolerance, which is illustrated in their elevated concerns about maintaining their financial position (63 percent vs. 53 percent across all Baby Boomer personas). They are more likely than the other segments to invest in cash, real estate and annuities.

Finally, there is the Rock On Baby Boomer investor, the youngest and least wealthy segment in comparison to their older cohorts. Nearly half are either working (32 percent) or are semi-retired (15 percent).  As such these investors are laying the foundation for a secure financial future. An overwhelming majority identify their risk tolerance as moderate (65 percent), while 17 percent indicate they are more conservative (17 percent). If they had a financial windfall, nearly half (47 percent) said they would invest that money in a safe account. The Rock On Baby Boomer investor reports having 41 percent of their assets in retirement accounts to ensure they can keep rockin’ in their retirement years.

Each Baby Boomer segment has its own financial needs and presents unique challenges and for the provider. Moneybags and the Big Middle, for example have suspicions about advisor objectivity, while the Cowboy thinks he or she rides taller alone in the saddle

Educate them as to investment opportunities that are tailored to their investment mindset—cash vehicles in the U.S. for Moneybags; foreign investment for the Cowboy, for example. Understanding what makes Baby Boomer investor segment tick will be crucial to keeping their business as they plan for and enter their retirement years.