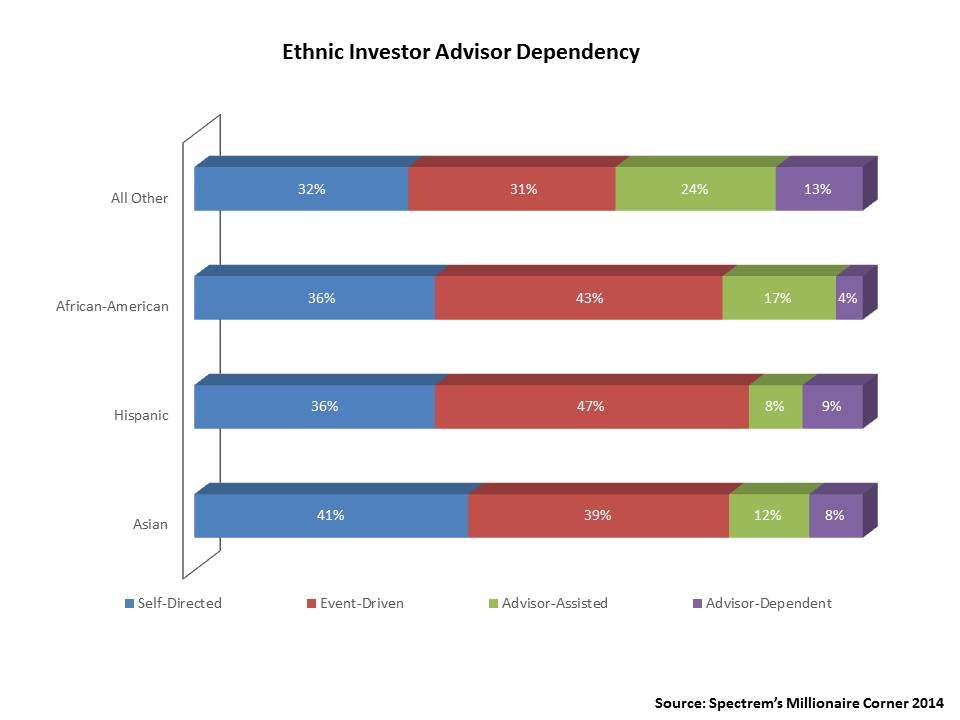 Financial advisors often need to tailor their advice based on the investor’s age, gender, wealth level, and occupation and advisor dependency. They also need to consider the investors’ ethnic background.

Among affluent ethnic investors surveyed, Asians are most likely to identify themselves as self-directed, meaning they make all of their financial and investment decisions without the benefit of a financial advisor.

Four-in-ten identify themselves as self-directed, compared with 36 percent of Hispanics and Blacks, respectively. They are also the least likely to consult with an advisor for a specific event, such as asset allocation or saving for college or retirement (39 percent vs. 43 percent of affluent Black investors and 47 percent of Hispanics)

Accordingly, affluent Asian investors are more likely that their Hispanic and Black counterparts to say they can do a better job of investing than a professional advisor. (35 percent vs. 30 percent and 27 percent, respectively).

Among Affluent Asians who do use a financial advisor in some capacity, the highest percentage uses either a full service broker or discount broker. Forty percent rely and trust their advisor for most of their financial needs, while one-third report they keep a portion of their investments with an advisor for the purpose of comparing results with their own investments. Thirty percent turn to an advisor for specific types of investments such as real estate or alternative investments.

A majority (53 percent) rate their advisor on whether or not he or she regularly outperforms the market, compared with 46 percent of affluent Hispanic investors and 4 percent of Blacks.

The highest percentage (39 percent) has been with their advisor for between 3 to less than 10 years. These advisors are most likely to have been referrals from friends or family members. As for advisor loyalty though, 54 percent of affluent Asians said they would remain with the firm if their advisor left to work elsewhere. Of these, six-in-ten said the safety and brand name of the company was more important than their advisor relationship (not surprising, as affluent Asians are less likely than their Black and Hispanic counterparts to feel that most financial advisors are professional and knowledgeable.

There is a pronounced wariness among affluent Asian investors surveyed toward financial advisors, with six-in-ten believing that many financial advisors are biased toward a certain group or type of products, while half think they are more concerned with selling products than in working in their clients’ best interests. Roughly two-thirds (64 percent) find the services of a professional advisor to be very expensive, compared with 59 percent of affluent Blacks and 56 percent of Hispanics.