Over the past thirty years Spectrem’s research has consistently identified education as one of the fundamental factors predicting overall financial success.  Generally, more than 95% of Millionaires completing our surveys have a college education and approximately 50-60 percent often have a graduate or professional degree of some type (MBA, JD, MD, Phd and others).  In fact, 85% of affluent households with dependent children believe that getting a college education is very important for their children.  (It’s interesting to note that those with over $15 million of net worth are the least likely to believe that getting a college education is important at only 60%).

Yet many times wealthy households are perceived as being obsessed to ensure that their child receives the best education.....and to some that means their child must receive an Ivy League education.  Is this true or is it just a myth furthered by movies, literature and the mainstream media?

Having raised my own children in a relatively affluent area, I acknowledge that there is some truth to the stereotype.  Clearly the college admissions scandals that include Lori Loughlin and other entertainers, company CEOs and others perpetuated this myth.  But the reality is much different.  While wealthy households believe education is important, they are often cost conscious and aware of the fact that many children will do well going to a trade school or community college.

In Spectrem’s recent report Parenting and Financial Issues parents currently with dependent children were asked the types of post-high school education they would support for their children.  While roughly a quarter would not support their child going to technical school or junior college, many were open to that option, regardless of wealth.  What’s more interesting is that 22% would not consider a four-year private university, probably due to cost.  Note that the number of parents considering a private university increases with wealth. 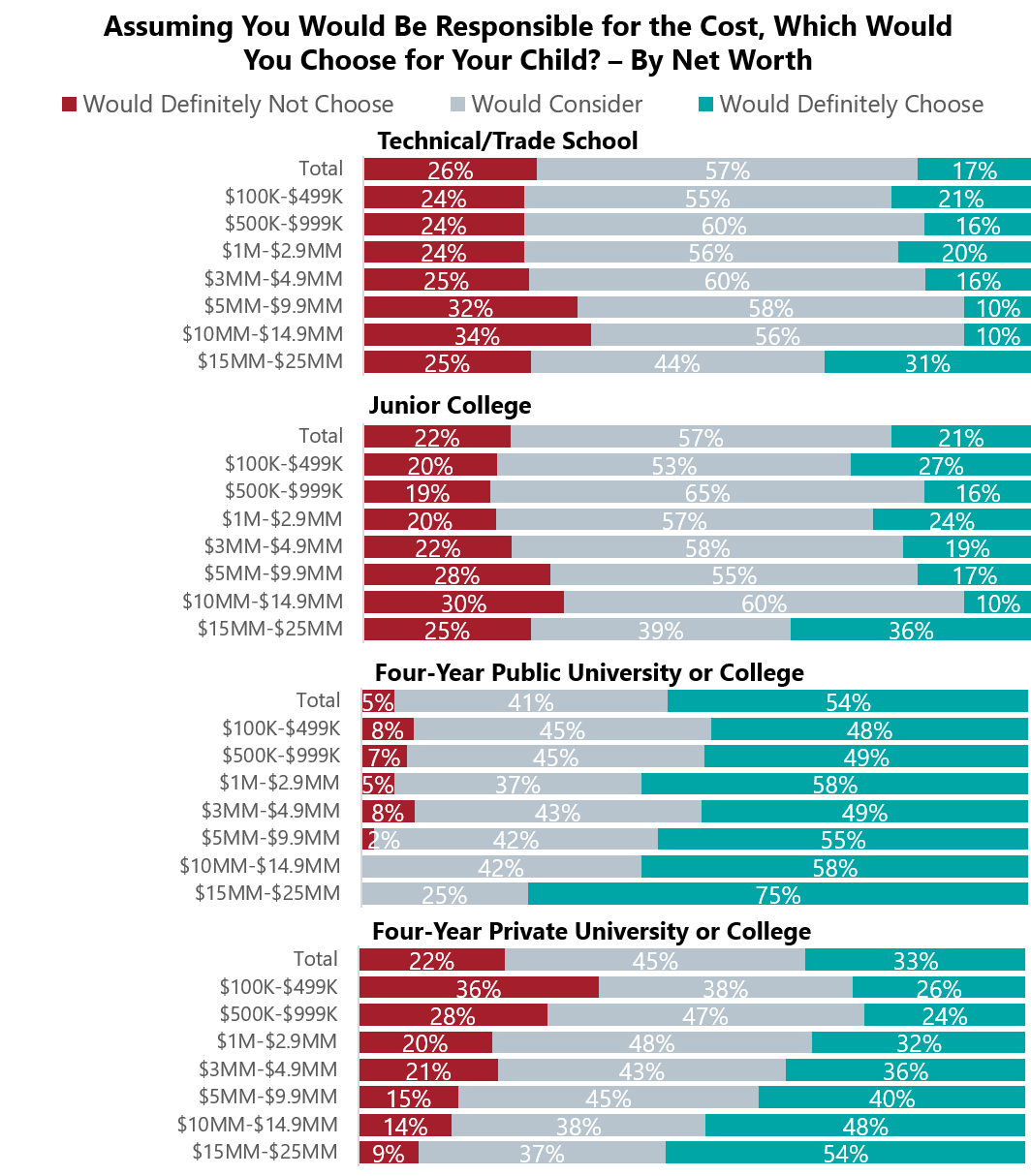 There are many interesting findings in this chart.

1.     Note that the wealthiest households are the most open to technical/trade school as well as a private four-year university.  These parents have the assets to support any choice their child might make and arguably may feel that their children will receive enough assets through inheritance to maintain their lifestyle.

2.     All of the groups prefer the four-year public university over the other choices.  Perhaps they believe in the importance of a four-year degree but are also conscious about the cost.

3.     Even the wealthiest households prefer the four-year public university.  Perhaps this is perceived as the best dollar for the value.

So are the wealthiest households education snobs?  No.  Just like everyone else they realize the cost of education is very high and they are looking for the best value for their dollar.  And while there are many that don’t want their child to go to a technical school, they have also probably paid a large amount of money to plumbers and contractors during their lifetime and realize that these are viable educational pursuits as well.

In the next few months Spectrem will be looking specifically at Wealthy Women and Market Volatility.  The research will be reviewing their concerns about how the pandemic has financially impacted their family.