Are Affluent Investors Concerned about Travel? 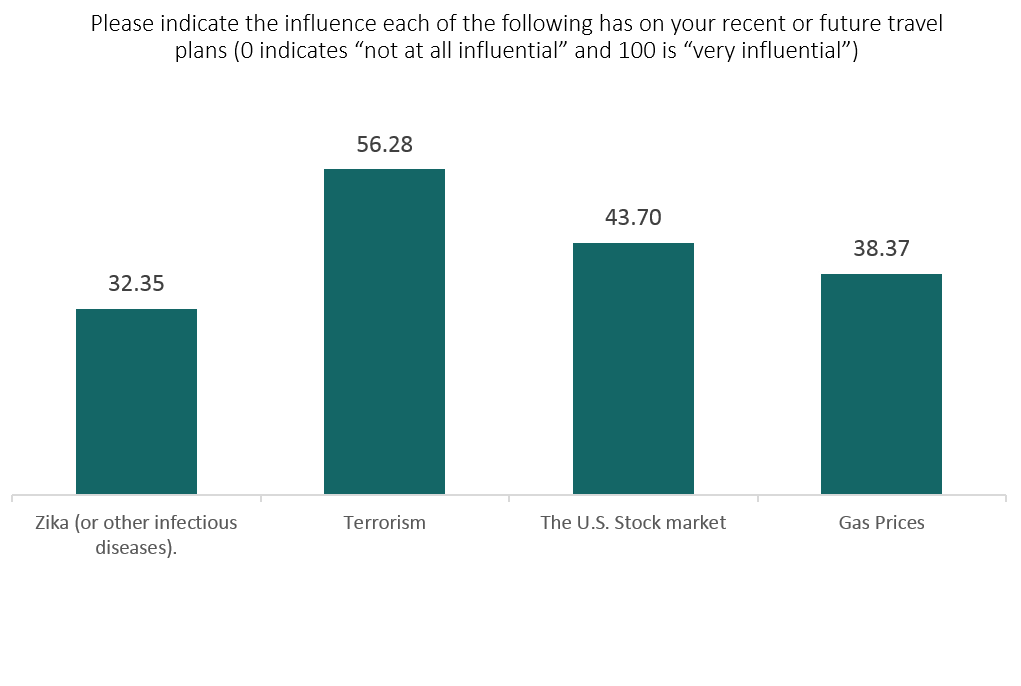 In these modern times, traveling is a different ball game.

While technological advances and digital communication has made some aspects of travel easier (reservations, travel alerts, etc.) some aspects of modern life have become more complicated, and those complications extend into travel and vacation planning.

The world can be a scary place, and some outside influences are making it scarier. But is it scary enough to affect the travel plans of America’s affluent investors.

“Affluent investors have the money to travel, and our research shows most of them do so on a regular basis,’’ said Spectrem president George H. Walper Jr. “Measuring their concern level for factors that can affect travel plans, terrorism proves to be the No. 1 item on an affluent investor’s watch list.”

The surveyed investors were asked to measure the influence certain factors have, or have had, on recent or future travel plans, placing their level of concern on a scale of 0-100, with “0’’ meaning “not at all influential” and “100” corresponding to “very influential”.

Terrorism rated much higher than three other factors, with an overall rating of 56.54, just above the midrange of concern level. Being investors, the fate of the U.S. stock market received an overall grade of 43.91, while gas prices (which are creeping back up due to recent announcements of gas supply cutbacks from the Middle East) scored a 37.60. Communicable diseases such as Zika or Ebola got the lowest mark of concern at 32.02.

The investors were segmented by age, wealth level, occupation, retirement status and political affiliation, and those segments showed different levels of concern.

Age is definitely a factor in the concern level of investors. Retired investors (presumably older) rated “terrorism”’ at 60.33, one of the highest ratings for that factor. Investors over the age of 60 rated it at 59.97, in contrast to investors under the age of 40, who rated it at 46.83.

But topping even retired investors was investors who are corporate executives. The executives gave “terrorism’’ an average score of 63.53. From a political standpoint, Republicans rated “terrorism’’ at 62.71, much higher than Democrats, who rated it at 51.46. Independents put their concern over terrorism at 54.07.

Is it fair to say younger investors just have less concern about everything in their lives? Not necessarily, and not in the case of travel issues. While the under-40 group did rate terrorism very low, their concern over infectious diseases came out higher than the average at 34.87. They were more encouraged by gas prices (42.14 to the 37.60 average) and less concerned about the stock market (38.06 to 43.91).

What is telling is that unmarried investors are less affected by everything offered in the survey, especially terrorism.

The infectious disease issue received the highest level of concern from Business Owners (42.94) and the stock market fluctuations were most a factor to Republicans and the oldest segment of investors.