Are Advisors And Clients On The Same Page? 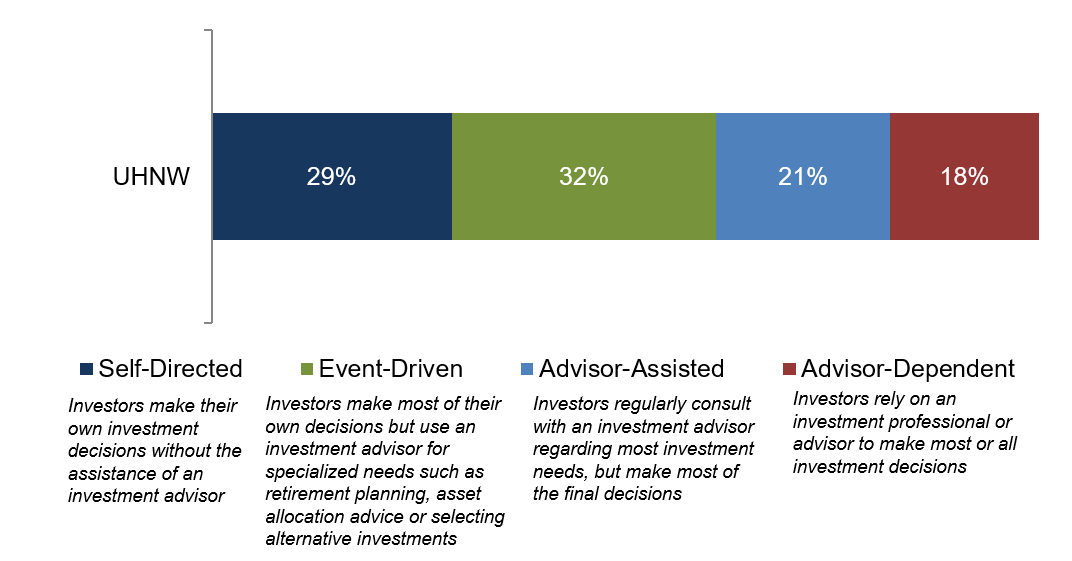 The wealthier the investor is, the more likely he is to have an active and ongoing relationship with a financial advisor.

But even among Ultra High Net Worth investors, those with a net worth between $5 million and $25 million, how dependent they are on their advisor varies. Although it is true that every investor is different from every other investor, there are similarities that can be accepted and utilized by advisors in their dealings with wealthy investors. Advisors must understand the approach clients prefer when investment decisions are made.

Financial Behaviors and the Investor’s Mindsetdetails the level of advisor-dependency among UHNW investors and how that dependency affects how they work with an advisor, their attitudes towards risk, an investor’s core beliefs, and retirement concerns, among other matters.

The study lists four levels of advisor-dependency: Advisor-Dependent, Advisor-Assisted, Event-Driven and Self-Directed. Advisor-Dependent investors place most, if not all, decisions in the hands of their advisor; Advisor-Assisted investors consult regularly with advisors on most financial decisions but make most of the final decisions themselves; Event-Driven investors use advisors only for specialized needs such as retirement planning or seeking alternative investment options, and Self-Directed investors do all of their own research and actively trade their portfolios, using an advisor for only some of their assets.

The last group of investors tend to require a great deal of time on those occasions when they interact with their advisor. However, they are much more likely to take risk with a portion of their investments in order to earn a higher rate of return (59 percent to just 31 percent of Advisor-Dependent investors).

“Even though there is an increased use of financial advisors among the wealthier investors, attitudes and concerns can relate to the level of advisor-dependency an investor has,’’ said Spectrem president George H. Walper Jr. “While investors who seldom use advisors have to monitor their investments more closely than advisor-dependent investors, it is the advisor-dependent that seem to worry more about having enough money to get them through their retirement.”

Advisors need to know where investors self-identify along the advisor-dependent scale. Almost all investors want to have some involvement in the investing process; the difference comes in whether they want to make the final decisions themselves or want the advisor to pull the trigger.

Also, while Advisor-Dependent and Advisor-Assisted investors want advisors involved in most, if not all, of their portfolio decisions, Event-Driven investors make most of their own decisions but use an investment advisor for specialized needs resulting from a life event, such as planning for retirement.

Even wealthy investors look to improve their wealth position, and our study asked the UHNW investors what upcoming change in their life might boost their wealth position. While investors with a strong advisor-dependency are planning to tighten their belts to cut down on current spending (24 percent of Advisor-Assisted and 22 percent of Advisor-Dependent), investors less reliant on advisors are going the other way, changing their spending patterns or expecting greater income from their current or future job.

There are perceivable differences in investors, their advisor-dependency and their relationship with the core beliefs of the American Dream. Investors who are dependent upon their advisor have a stronger belief in the value of home ownership than do investors with play the investment game without an advisor or, even more so, those who use an advisor only for major investment decisions such as retirement planning or looking into alternative investments.

Advisors will find this final statistic appealing: UHJNW investors who do not use advisors or use advisors sparingly are twice as likely to be concerned about being able to retire when they want to. While 26 percent of Event-Driven UHNW investors express that concern, only 12 percent of Advisor-Dependent do so. However, Advisor-Dependent investors express greater concern about having enough money available to them once they do retire.