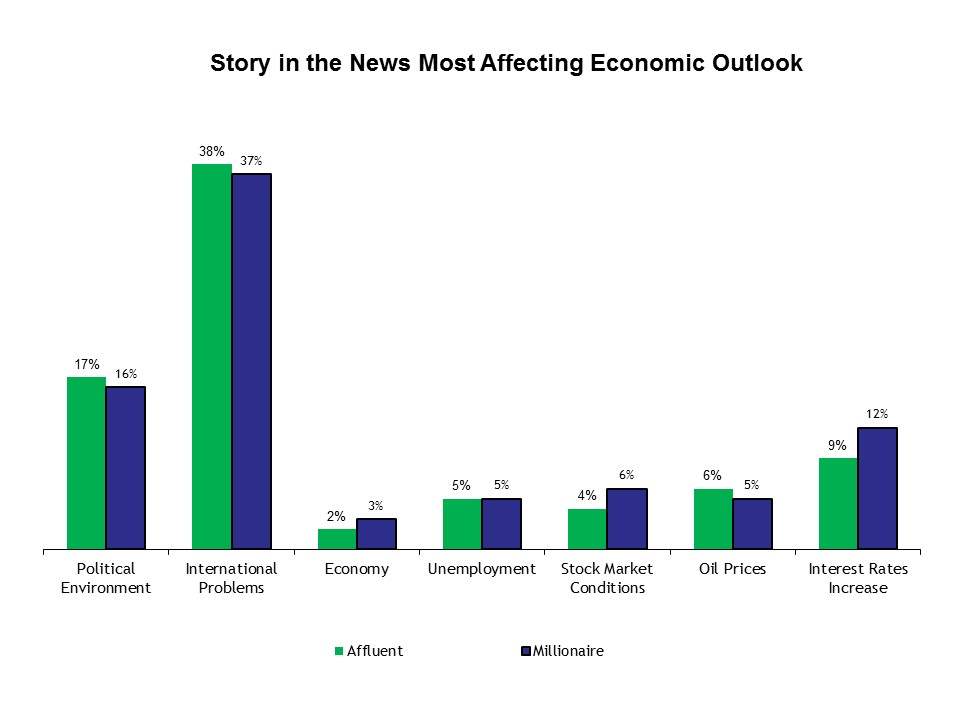 More than the economy, stock market volatility or market conditions, Affluent investors surveyed in August by Spectrem Group indicated that news developments overseas are having the biggest impact on their current economic outlook.

Nearly four-in-ten (38 percent) cited “international problems” as the story in the news most affecting their economic outlook. This is up from 10 percent last May when this question was last asked.  This is the first time since last February that “international problems” were most prominent on affluent investors’ radar. That month, Greece was hurtling toward default until Athens reached an agreement with its Eurozone creditors that included in part a four-month extension of its financial assistance program.

Prior to that, the highest percentage of affluent investors (44 percent) were most focused on international news in relation to their economic outlook. At that time, Russian aggression against Ukraine, attacks and counterattacks by Hamas and Israel shattering cease fire agreements and deeper incursions into Iraq against the terror group ISIS were dominating the news.

Mid-August, Eurozone leaders without the participation of the International Monetary Fund, agreed to a third bailout of Greece that for now will keep Greece in the Eurozone, but came at a political cost to Prime Minister Alexis Tsipras, who faced rebellion from members of his own party. The hard-fought agreement calls for a review scheduled for October.

The Spectrem Group survey was fielded between August 14th and 20th. During this time, concern over China, the world’s second biggest economy, began to rise following the news that the government had devalued its currency in a bid to stabilize its economy.

News stories related to the domestic political environment were also of increased interest to affluent investors, respondents said.. Seventeen percent (up from 14 percent in May and 12 percent in February) said these stories in the news are having the most effect on their economic outlook. In August, one of the chief points of contention between lawmakers and the White House was the Iran nuclear deal, which lifts economic sanctions on Tehran in exchange for that country curbing its nuclear program. Look for the environment to get stormier as the presidential race progresses and the candidates focus on the economy both here and abroad.

In comparison, news stories about the economy, the stock market, unemployment and oil prices are not presently having nearly as great an impact on Affluent investors. Nine percent said that news stories regarding a possible increase in interest rates are affecting their economic outlook.  This is up from 6 percent in February and at a time when current speculation is that the Federal Reserve will raise interest rates for the first time since 2006 as early as September.