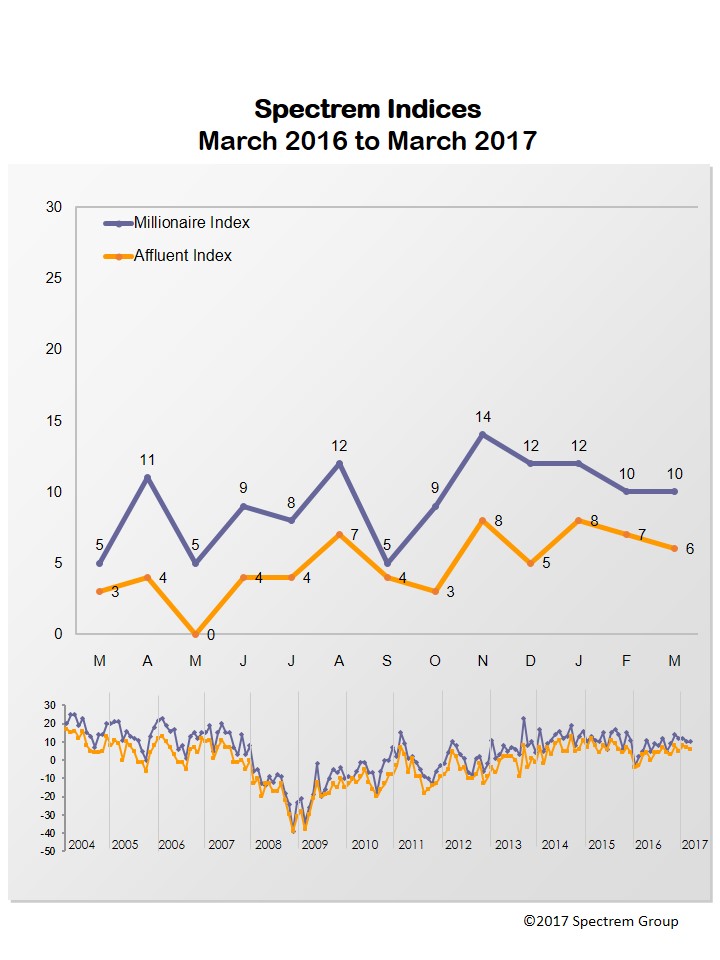 The monthly Spectrem Affluent Investor Confidence indices track changes in investment sentiment among the 16.3MM households in America with more than $500,000 of investable assets (SAICI), and those with $1MM or more (SMICI). This month’s survey was fielded between March 16-22, 2017.

What happens in Washington D.C. doesn’t stay in Washington. When asked what they consider to be the most serious threat to achieving their household’s financial goals, 30 percent of Affluent investors cited the political climate. This is the highest percentage in the 13-year history of the Spectrem Affluent Investor Confidence indices.

This in part offset an increase in confidence in the economy as reflected in the March Spectrem Affluent Household Outlook, a monthly measure of four financial factors that impact the daily lives of affluent investors, and is one of the drivers of the SAICI and the SMICI. At 26 pts., the overall Outlook was flat for the fourth consecutive month, but it is up 6.2 pts. from the same period in 2016.  In fact, all of the Household Outlook components—Household Assets, Household Income, the Economy and Company Health—are up over March 2016.

Confidence in the economy rose to a 25-month high, but confidence in Household Income was down. Household Assets and Company Health showed little change over the previous momth.

Another driver of the Sprectrem Affluent Investor Confidence indices is how Affluent investors intend to invest in the coming month. In March, they were on the one hand perhaps looking to catch the wave of what had been the post-election rally, and on the other, looking to increase their fixed income investments.

The month began at an historic high as the Dow Jones industrial average surpassed 21,000 for the first time. But during the period when Spectrem Group surveyed Affluent investors as to how they would invest in the coming month, the Dow began an eight-day slide. The Dow was down around 1 percent for the month, but it was still over 20,000. Also during the period, the Federal Reserve increased interest rates for the second time in three months, but indicated it would continue to move slowly because of the economy’s slow growth.

“There is a push-pull of factors impacting the confidence of Affluent investors,” said Spectrem President George H. Walper, Jr. “A higher percentage of affluent investors—especially Millionaires—intend to invest in Equities in the coming month, but they also report a higher likelihood of investing in fixed income products. Despite a surge of confidence in in the economy in March, the Spectrem Affluent Investor Household Outlook remains flat. Unease about whether the current political climate may hamper their ability to achieve their household’s financial goals stands at a record high.”