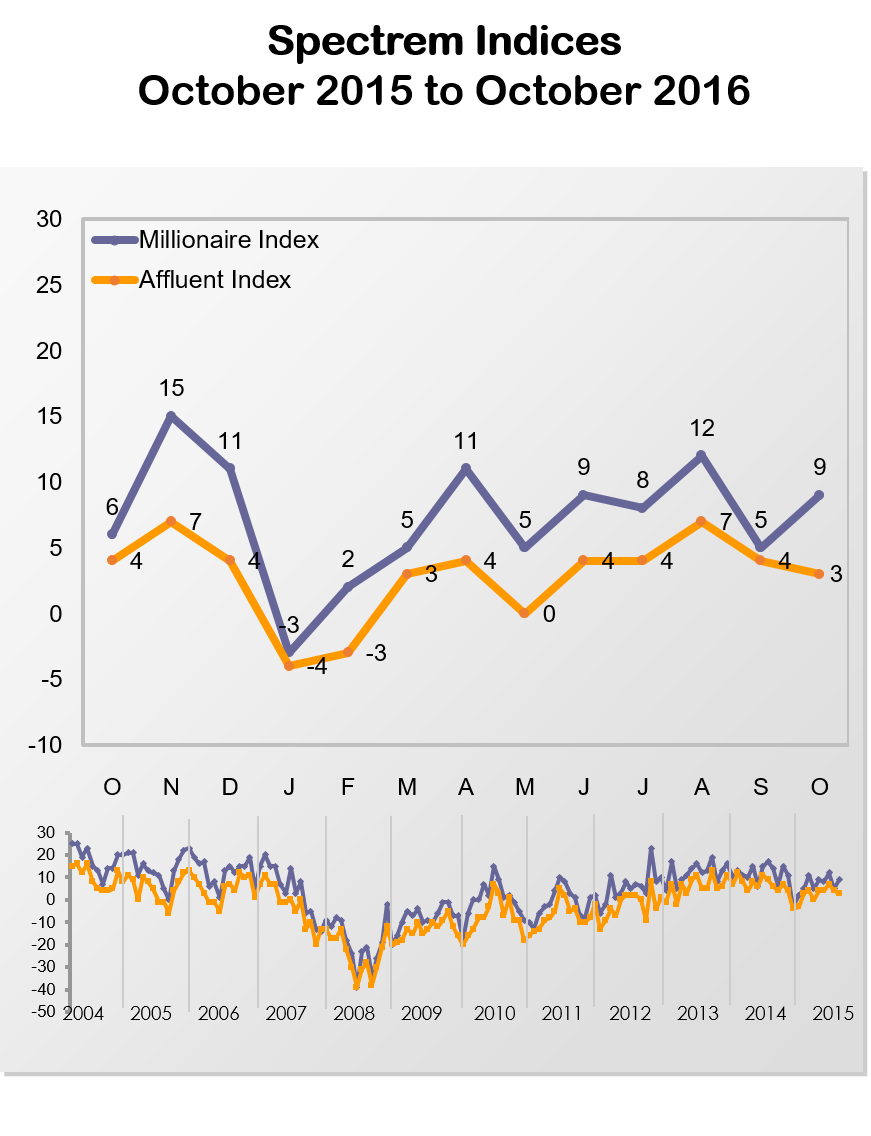 With one week to go until the U.S. Presidential election, renewed concerns about the economy and a cautious investment mindset have resulted in a dip in the Spectrem Affluent Investor Confidence Index (SAICI®) in October. The SAICI declined one point from September to 3, its lowest point since May of this year. The Spectrem Millionaire Investor Confidence Index (SMICI®) gained four points to 9.

Since 2004, the monthly Spectrem Affluent Investor Confidence indices have tracked changes in investment sentiment among the 16.3MM households in America with more than $500,000 of investable assets (SAICI), and those with $1MM or more (SMICI). This month’s survey was fielded between October 13-19.

The six-point gap in the October indices is the widest since April 2016, and is consistent with Spectrem research showing that Millionaire households tend to have a more optimistic investing mindset than non-Millionaires.  “Growing numbers of Affluent investors indicated in October they plan to stay on the investment sidelines in the coming month due to lower confidence in the direction of the U.S. economy,” said Spectrem President George H. Walper, Jr.  “Millionaires, who are more likely to consider themselves savvier than less affluent investors, remain more confident than their less wealthy counterparts, but they too signaled an increased likelihood of remaining on the sidelines in the coming month.”

There were telling gaps in investor confidence based on gender and political affiliation. The SAICI for men is a 3 and a 7 for women. Likewise, the October SMICI is higher for women than it is for men (11points vs. 7 points). At the same time, the SAICI for Affluent investors who identify as Democrats is at 9 compared with 6 for Independents and -2 for Republicans. The SMICI is at 17 for Democrats (up 26 points from the previous month), 12 for Independents and 3 for Republicans. This could be, in part, a reflection of confidence in how the election will turn out next week.

But on the investment front, there was an increase in the percentage of Affluent investors who indicate they will hold on the investment sidelines in the coming month, according to the most recent Spectrem survey. The results of this monthly survey are one of the drivers of the Spectrem Affluent Investor Confidence indices.

Just over 39 percent of surveyed Affluent investors, a 20 percent increase from the previous month, said they would hold on the investment sidelines in the coming month. In comparison, intention to invest in equities was flat compared to September, with intention to invest in Stock Mutual Funds up 2 percent and Stocks up 9 percent.  The next most likely investment for Affluent investors in the coming month is Cash; just over 15 percent—a drop of 36 percent from the previous month—indicated this is how they will invest. There was a 4 percent uptick of Affluent investors who indicated they would invest in Bonds.

Again, wealth segment, gender and political affiliation are factors in investor confidence. Millionaires, men, and Democrats indicate they are less likely to hold on the investment sidelines than non-Millionaires, women and Republicans and Independents, respectively.