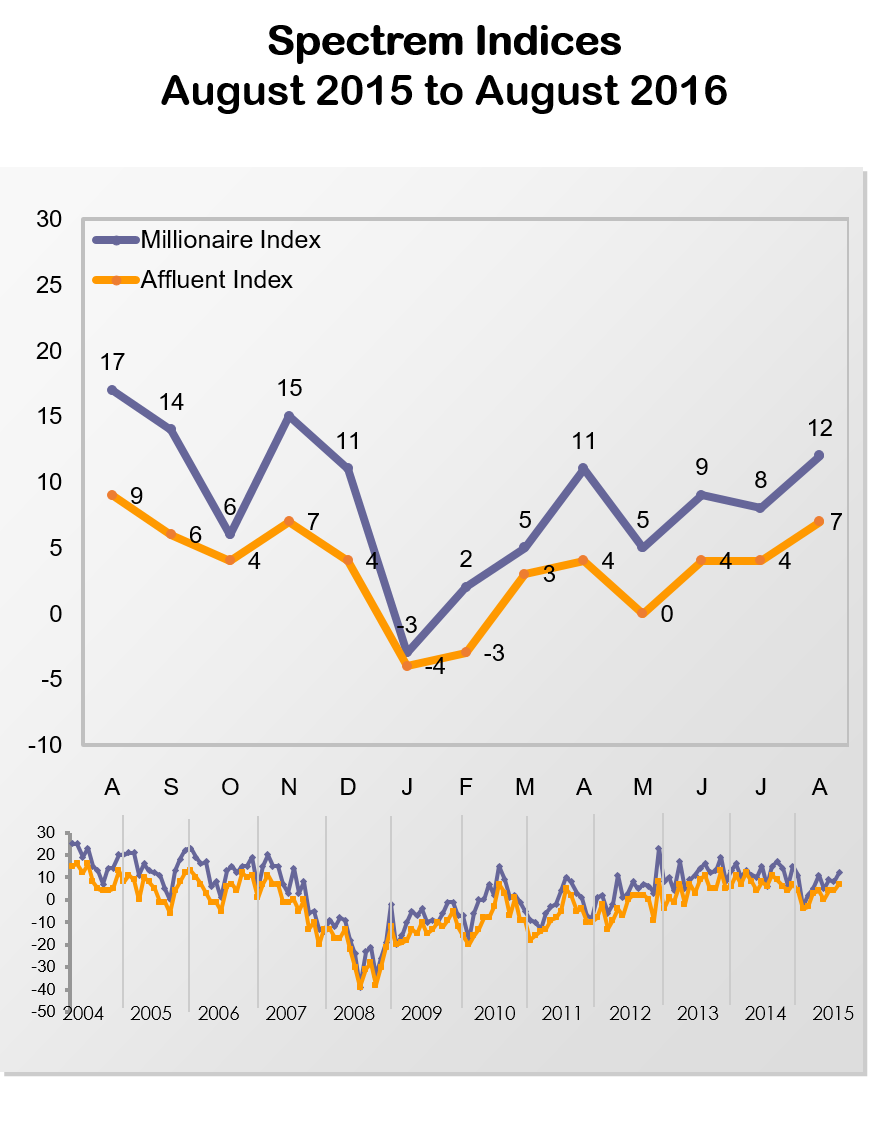 Since 2004, the monthly Spectrem Affluent Investor Confidence indices have tracked changes in investment sentiment among the 16.3MM households in America with more than $500,000 of investable assets (SAICI), and those with $1MM or more (SMICI). This month’s survey was fielded between August 17-23.

An analysis by gender and political affiliation finds marked differences in investment confidence levels.  The SAICI for men is at 10 compared with 0 for women. The SMICI for men and women is basically even (12 for men and 11 for women).

The SMICI is at 16 for affluent investors who identify as Democrat compared with 12 for Republicans and 10 for Independents.

Although affluent investors report that news stories about the turbulent presidential campaign are having the greatest potential impact on their economic outlook, it doesn’t seem to be clouding their investment mindset. Buoyed by the recent robust market performance, the intention of affluent investors to hold on the investment sidelines in the coming month dropped to an 18-month low. This is a positive driver on the Spectrem Affluent Investor Confidence indices.

“Strengthening financial markets are translating into the highest confidence levels reported by affluent investors since November,” said Spectrem President George H. Walper, Jr. “This is reflected in their stated intention to be more likely to invest in equities in the coming month rather than hold on the investment sidelines. Although there is increased confidence, ongoing concerns about the economy kept the indices from gaining further traction.”

Top Takeaways for Advisors and Providers:

·         With a surge in investment confidence, it is up to advisors to talk to clients about their investment mindset and review their risk tolerance and market trends that will keep emotional investing in check.

·          The Spectrem Affluent Household Outlook was flat in August. How are your clients feeling about their household income and assets? What is their mindset regarding the economy? These topics are good discussion starters to review their financial plan to see if they are on track to achieve their financial goals.