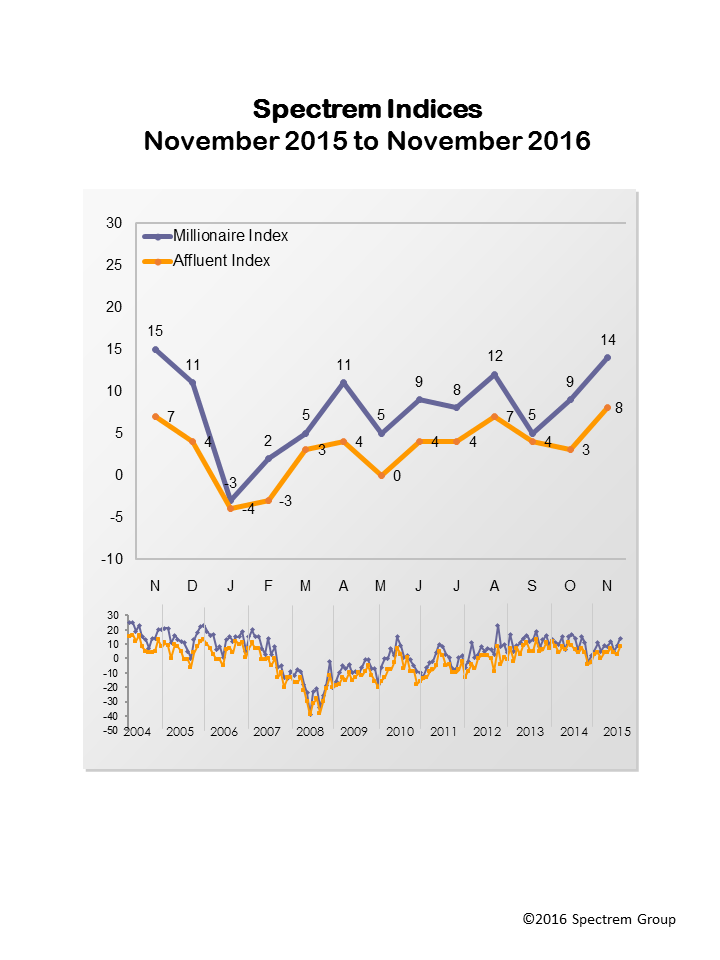 The six-point gap between the SMICI and the SAICI is a return to historical trends that Millionaires have a more optimistic outlook than non-Millionaire investors.

Since 2004, the monthly Spectrem Affluent Investor Confidence indices have tracked changes in investment sentiment among the 16.3MM households in America with more than $500,000 of investable assets (SAICI), and those with $1MM or more (SMICI). This month’s survey was fielded between November 16-21.

Political affiliation was a strong factor in gauging investor confidence. Affluent investors told Spectrem Group that news stories about the political climate most affected their economic outlook. In November the SAICI for Republicans was at 12, a gain of 14 pts. from October. The SAICI for Democrats was at 3, a drop of 6 pts. For Independents, it was at 12, a gain of 6 pts. from the previous month.

The November SMICI for Affluent investors who identify as Republicans was at 21, a gain of 18 pts. from October, while the SMICI for Democrats was at 3, a drop of 14 pts. The SMICI for Independents was at 18, a gain of six points from the previous month.

The indices are higher for Affluent male investors than they are for women. The November SAICI for males is 12, a gain of 9 pts. from the previous month, while the Index is at 0 for females, a drop of 5 pts.  The SMICI for males surged 11 points in November to 18, but dropped 8 pts. to 3 for females.

One of the drivers of the Spectrem Investor Confidence indices is the Spectrem Affluent Household Outlook, a monthly measure of four financial factors that impact Affluent investors’ daily lives: household assets, household income, company health and the economy. The November Spectrem Affluent Household Outlook gained almost 12 points to reach a 16-month high. It is up two points from the same period last year.

While confidence in household assets and company health increased to three-month highs in November, confidence in the economy surged to its highest level since July 2015.

Another factor in the rise of the indices was a drop in the percentage of Millionaire investors who indicated that they would hold on the investment sidelines in the coming month. “With the market surge in the week following the election, Affluent investors are indicating a cautiously-optimistic investment mindset,” observes Spectrem Group President George H. Walper, Jr. “Millionaires, especially, are indicating that they will increase their exposure to investing in the coming month rather than hold on the investment sidelines.”