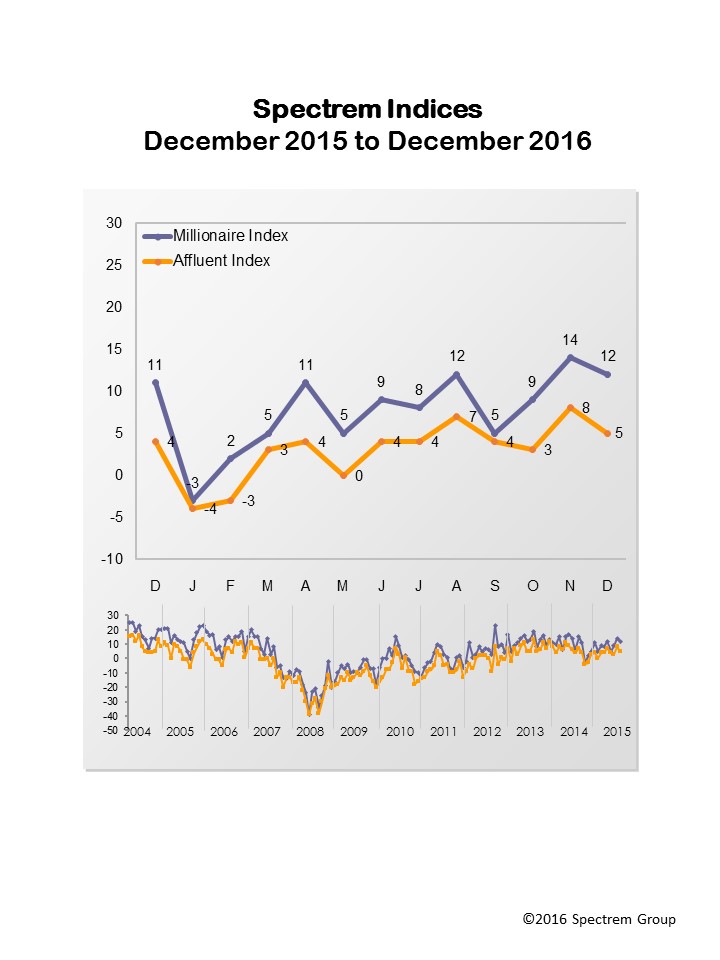 A year-end market rally and the second Federal Reserve interest rate hike in a decade served to slightly dampen affluent investor enthusiasm in December.  The Spectrem Affluent Investor Confidence Index (SAICI®) and the Spectrem Millionaire Investor Confidence Index (SMICI®) each posted slight decreases in last month. The SAICI ticked downward three points from the previous month to 5, while the SMICI decreased two points to 12. Both indices stood one point higher than in December 2015.

Since 2004, the monthly Spectrem Affluent Investor Confidence Indices have tracked changes in investment sentiment among the 16.3MM households in America with more than $500,000 of investable assets (SAICI), and those with $1MM or more (SMICI). This month’s survey was fielded between December 14-19, 2016.

For the second consecutive month, political affiliation was a significant factor in gauging Affluent investor confidence. Prior to the election, the SAICI and the SMICI for Affluent investors who identified as Democrats was higher than it was for those who affiliate as Republicans and Independents. This has flipped since the Nov. 8 election. The December SAICI for Democrats is at -10, a drop of 13 since November. For Republicans it is at 9 (a dip of 3 pts. from the previous month and for Independents, 15 (a gain of 3 pts.).

“The rise in the Spectrem Affluent Household Outlook was driven primarily by increased long-term confidence among Millionaire investors in the economy and household income,” noted Spectrem Group President George H. Walper, Jr. “The Spectrem Affluent Investor Confidence Index and Millionaire Investor Confidence indices are in mildly bearish and neutral territories, respectively, but the slight dip can be attributed to affluent investors waiting to see how the market plays out as it continues to test unprecedented highs.”

While the indices ticked downward, the Spectrem Affluent Household Outlook, a monthly measure of four financial factors that impact investors’ daily financial lives, surged to a 19-month high in December driven by Millionaires’ increased long-term confidence in the economy. The December Spectrem Affluent Household Outlook is at 27.30 pts., a gain of almost five from November and up 12 pts. from December 2015.