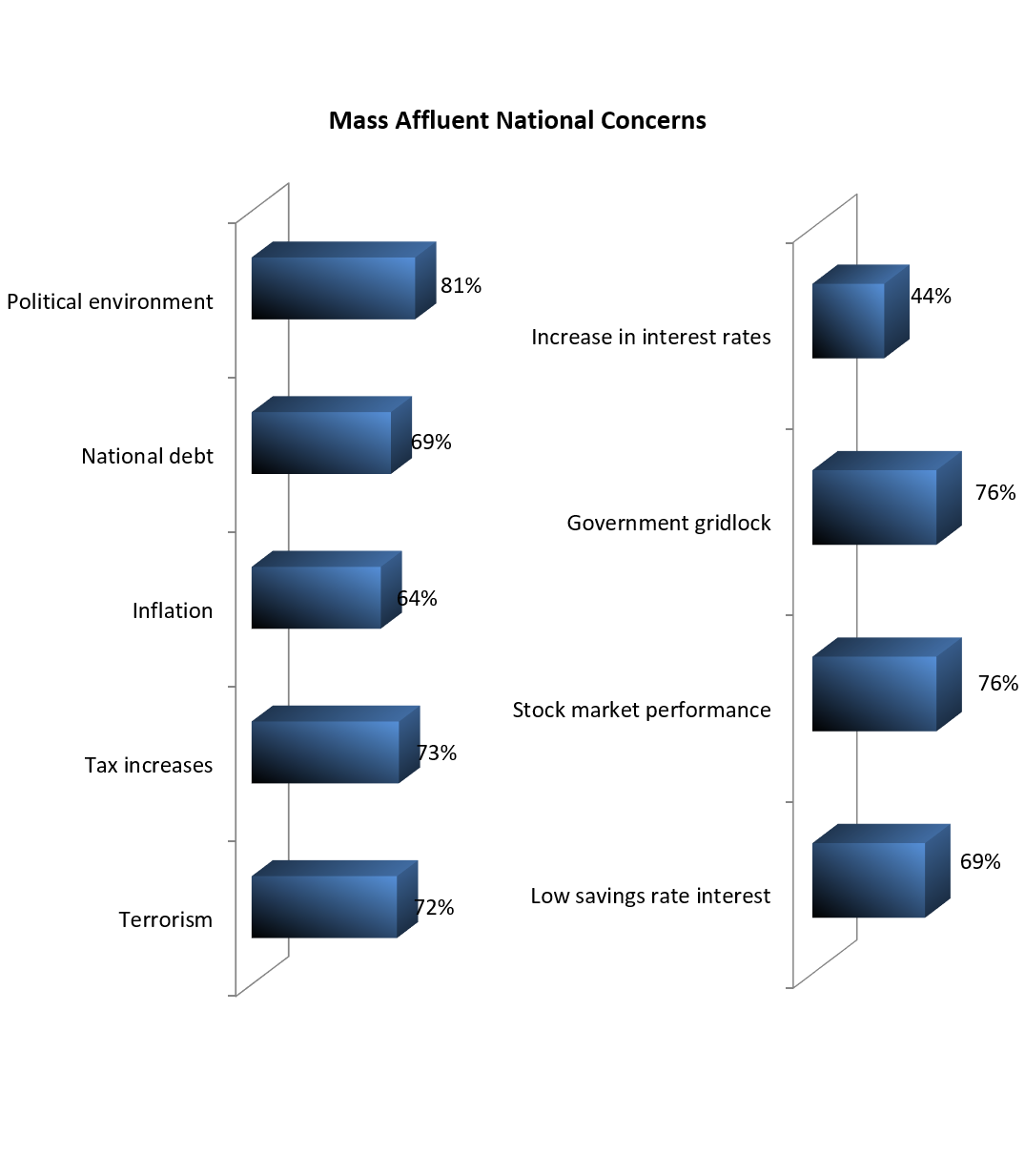 More than improving their investment performance and peace of mind, Mass Affluent investors consider the improvement of their financial knowledge to be the primary benefit of working with an advisor, our wealth market research finds. But financial advisors need to be conversant on a breadth and depth of issues beyond money management and asset allocation if they are to fully engage with their clients who have a myriad of concerns beyond their portfolios.

Financial Behaviors and the Investor’s Mindset: Mass Affluent Investors 2016: research finds that investors with a net worth between $100,000 and $1 million are more concerned about national issues than issues that directly impact their home, including maintaining their financial situation and health and education issues.

“Financial advisors need to have a full and in-depth conversation with clients about the issues that concern them,” observes Spectrem Group president George H. Walper, Jr. “From insurance to long-term health care, they need to be up on current events and industry trends above and beyond the market as they impact on an individual’s investor mindset.”

As with their wealthier counterparts, Mass Affluent investors indicate they are most concerned about the political environment (81 percent) and government gridlock (76 percent). This is telling in an election year that has seen unprecedented levels of rancor. The two presumptive nominees from the major political parties have expressed markedly different views on how to fix the economy. This breeds investor uncertainty about the policies the winning candidate will put into place once he or she is elected. Beyond the presidential race, there is continuing government gridlock and investor perception that the president and lawmakers will not or cannot work together. Concern levels on both issues are basically unchanged from last year.

But there is a heightened concern about stock market performance (76 percent vs 70 percent in 2015), which is predicated not only on the actions (or inactions) of the nation’s elected leaders, but also on a myriad of issues with which Mass Affluent investors express concern. Among them:

In comparison, on the home front, Mass Affluent investors indicate the highest concern over maintaining their financial position (61 percent) This is followed by concern over a spate of personal health issues, topped by the spouse’s health (59 percent). There is near equal concern about spending one’s final years in a care facility (51 percent) as there is one’s own health (50 percent). The same is true about the prospect of a family health catastrophe (48 percent) and having someone to look after them in their old age (47 percent). Just over half (52 percent worry about taking responsibility for their aging parents

Underneath these concerns, nearly four-in-ten Mass Affluent (37 percent) are worried about either they or their spouse losing their job.

Not surprisingly, concern about health issues are heightened among older Mass Affluent investors, while the youngest investors have more immediate major household expenditures on the mind, including financing their children’s education.