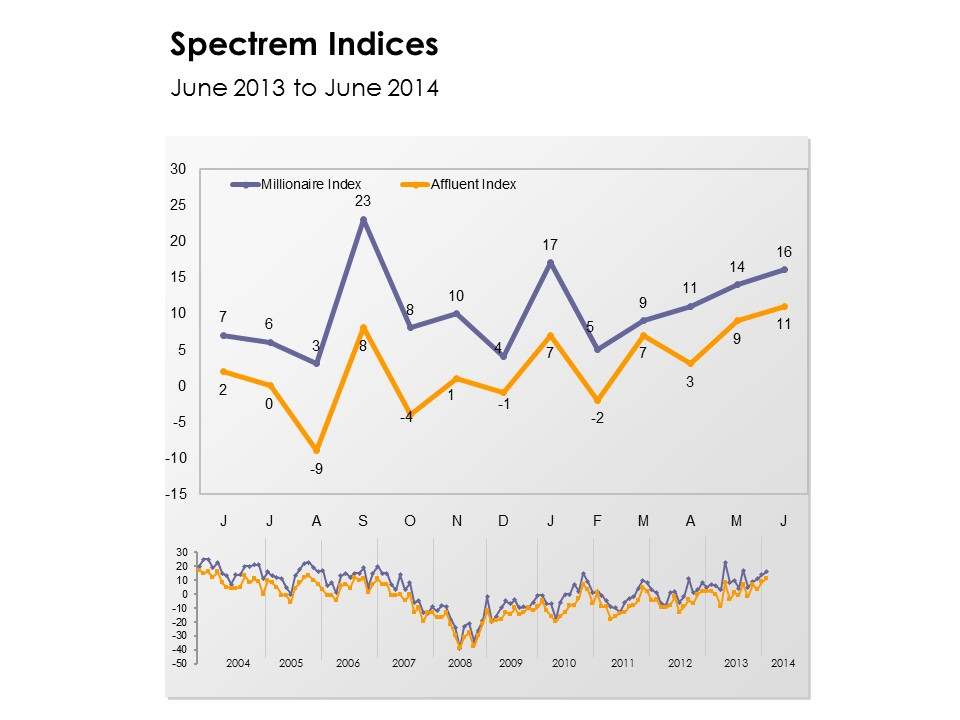 The Spectrem Affluent Investor Confidence Index (SAICI®) gained two points in June to 11, its highest reading since May 2007. The SAICI has increased in each of the last three months, something it has not accomplished since September-November, 2013.

The Spectrem Millionaire Investor Confidence Index (SMICI®) rose 2 points in June to 16, a five-month high. The SMICI has increased in each of the last four months.

Confidence in the economy and labor conditions continues to advance, according to the monthly Conference Board Consumer Confidence Index released this week. The Index rose from 82.2 in Mary to 85.2, a six-year high. Consumers are particularly optimistic about current conditions. The Conference Board’s Present Situation Index increased from 80.3 to 85.1. The Expectations Index, rose from 83.5 to 85.2.

The consecutive gains for both Spectrem Affluent investor indices similarly reflect growing, but not overwhelming investor confidence in the market and the economy.

When surveyed by Spectrem Group about how they intend to invest in the coming month, just slightly more Affluent investors than last month said they planned to hold on the sidelines. But among those surveyed, this was not the case with non-Millionaire investors. Generally less confident and more risk averse than their wealthier counterparts, they were less likely than Millionaires to say they would not be investing. Affluent investors overall said they planned to invest in Stocks in the coming month at the highest rate in nine months.

The June Spectrem Affluent Household Outlook, on the other hand, reflects caution. This monthly measure of confidence in financial factors that impact their daily lives ticked downward slightly from May. But here, again, non-Millionaires expressed a more positive mindset overall than Millionaires.

One factor fueling this wariness is the political climate and the perception that the White House and lawmakers cannot or will not work together to fix the nation’s economy. The highest percentage of Affluent investors consider this to be the most serious threat to achieving their financial goals.