Rationale for Using a Financial Advisor 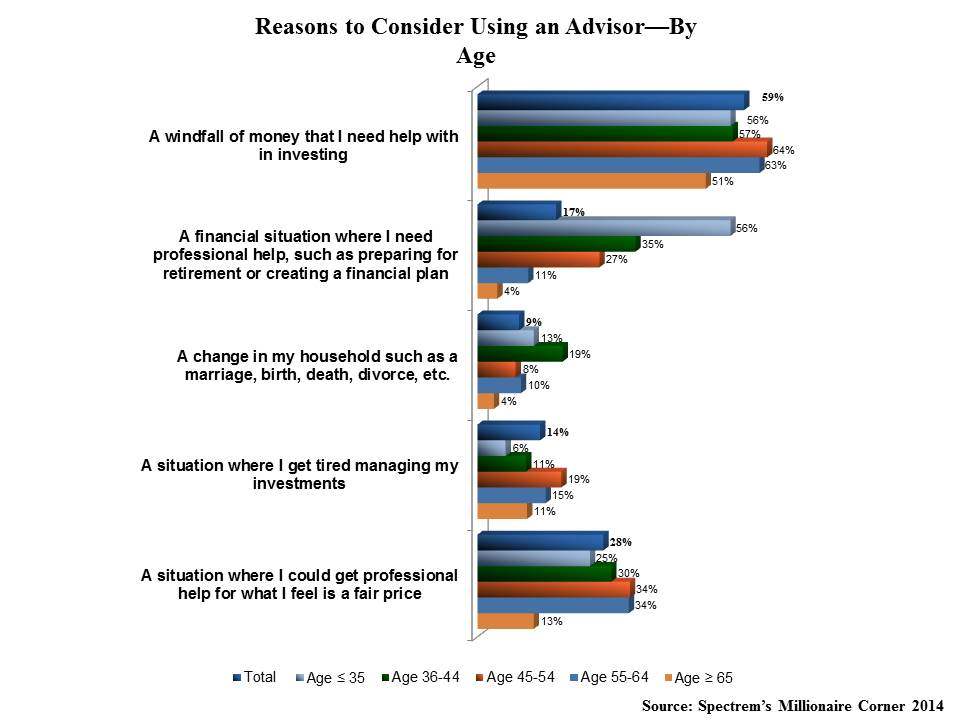 What would most compel a non-Millionaire investor to consider using a financial advisor? According to a new wealth level study conducted by Spectrem Group self-directed investors are most likely to seek professional personal finance advice in the case of a change in their financial situation.

Seventeen percent—the third-highest percentage of respondents—would consult with a financial advisor for a specific purpose, such as preparing for retirement or creating a financial plan, while 13 percent would seek out an advisor should they tire of managing their investments.

One-third (32 percent) of non-Millionaires do enjoy investing and would not want to give it up, according to a previous wealth level study conducted by Millionaire Corner earlier this year. This enthusiasm is heightened among younger investors under the age of 45 (42 percent), who are also more confident than older investors that they could a better job of investing than an advisor (36 percent vs. 22 percent of respondents overall). More than one-third (36 percent) of respondents overall like to be actively involved in the day-to-day management of their investments.

About four-in-ten non-Millionaires are self-directed investors, meaning they make all of their own investment decisions. One-third is event-driven, and will consult a financial advisor for a specific purpose such as asset allotment, saving for college or retirement planning.

Non-Millionaires at the highest end of the wealth level spectrum ($750K-$999K) are also most likely to seek out a financial advisor in case of a financial windfall (65 percent), whether the fees or commissions charged were considered reasonable (34 percent) or should they get tired of managing their investments.

For more information on the Mass Affluent investor, click here