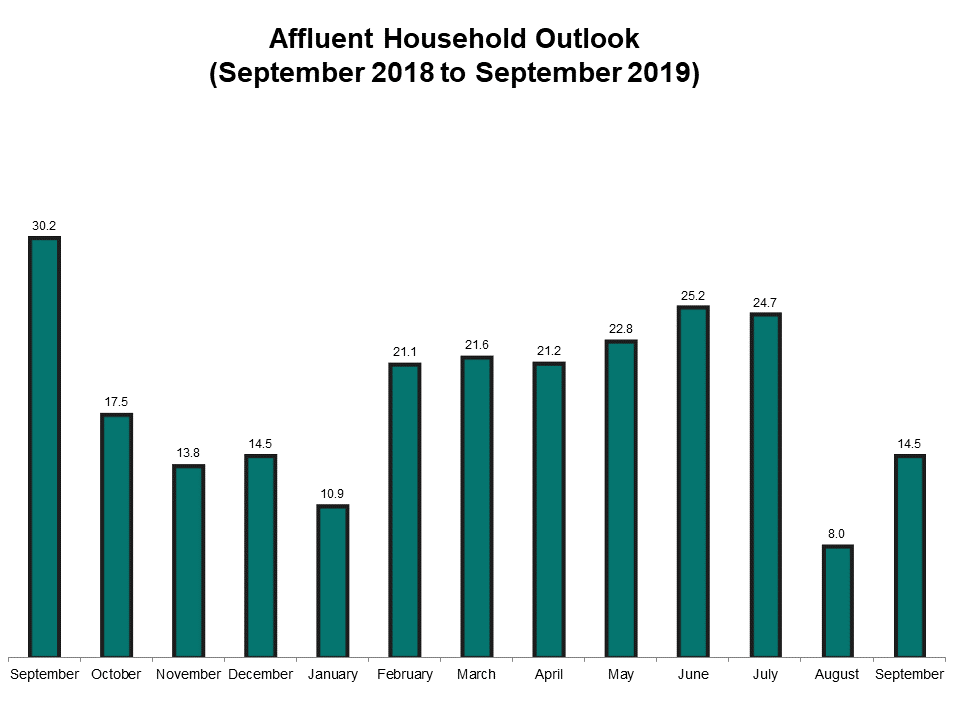 Spectrem’s Household Outlook, which measures an investor’s optimism about four financial components of their daily lives, is compiled monthly, and one month’s results have no impact on the results of the following month.

But it was not unexpected that the Outlook for September 2019 would see a significant bounce back from the incredible drop it experienced in August, when an economic recession seemed inevitable.

With no recession occurring, and the stock market indices remaining high, the Spectrem Household Outcook for September saw a positive move, from 8.00 to 14.50, after falling almost 17 points in August. The current mark of 14.50 is the third-lowest rating of the year, behind the 8.00 mark in August and a rating of 10.90 in January when investors were reacting to a severe stock market drop in December of 2018.

The Spectrem Investor Confidence Indices survey was conducted from September 17-23, when the nation waited to find out if President Donald Trump would be impeached for his act of requesting the President of Ukraine to investigate political opponent Joe Biden’s role in investments made by Biden’s son Hunter. At the same time, a major climate conference was held at the United Nations, and Britain suffered a second massive overhaul of its political roster in just two months. Still, investors concluded the month with a positive Outlook on the economic factors surrounding their household finances.

This number rarely changes much, and the value of household assets do not often rise or fall dramatically in a month’s time. But from February to July of this year, the overall Outlook for household assets ranged between 45 and 52, so this number remains low.

Millionaires actually dropped their Outlook over household assets from August to September, to 38.76, their lowest rating since January. The Outlook for household assets also dropped among female, Republican and retired investors.

With all the conversation surrounding a recession and impeachment, talk of tariffs have dropped, and as a result, there is an improved Outlook among investors regarding company health. Both the U.S. and China have dropped or reduced some tariffs recently in a continued effort to come to some overarching agreement.