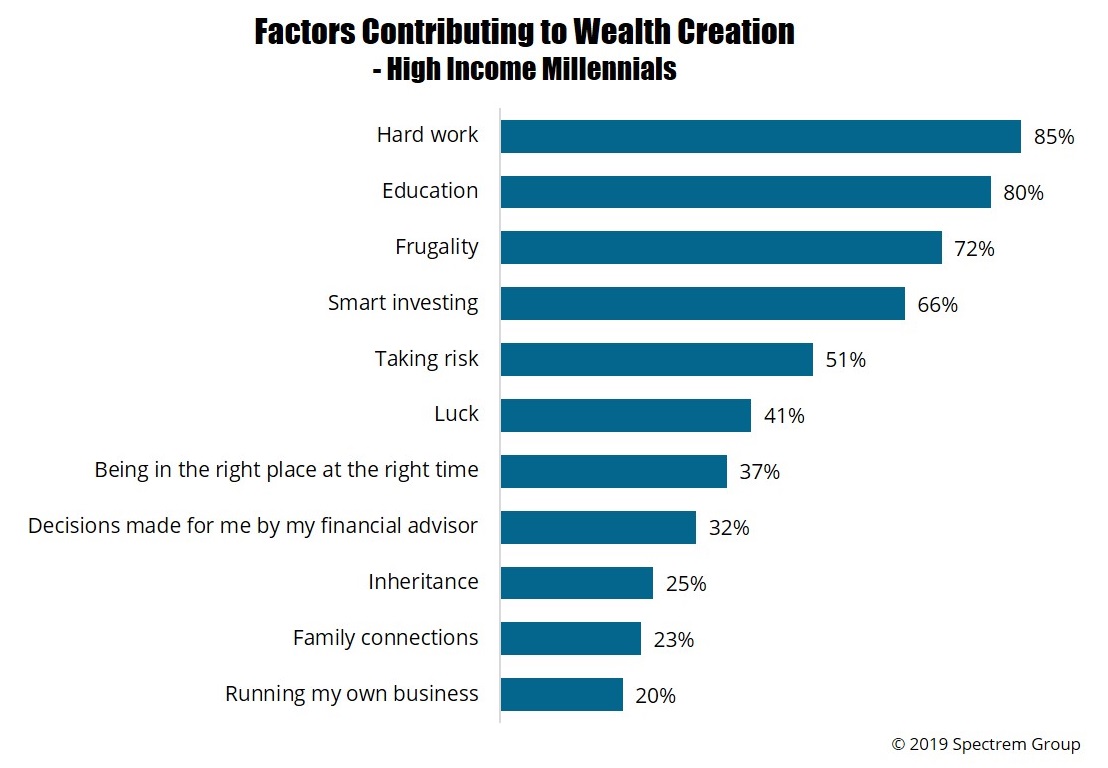 Millennials have reached the stage where they are a large percentage of America’s consumer population and investor population. In some ways, they are no different than Generation X investors were when they were the new kids on the block. Those citizens born around the turn into the 20th Century hated Baby Boomers, because they were all hippies, and Baby Boomers hated Gen X because they had life so easy.

Millennials face the same criticism from older generations. But now that Millennials are all adults and fully ensconced in the economics of America, it is fair to determine whether they are truly different than those investors who came before them.

One topic that indicates the differences between Millennials and older investors is in the factors they believe helped create their current wealth level.

In the new Spectrem study High Income Millennials, investors born between 1980 and 1995 with a household income of $100,000 if single and $150,000 if married were asked which factors played a role in the creation of their overall wealth. It is question Spectrem uses throughout its research with affluent and wealthy investors, and the Millennial study offered a chance to compare their responses to those of the entire wealthy investor community.

One of the best examples of the differences between Millennials and the general population of investors is in the most popular response to the question, “hard work”. While 92 percent of all investors credit hard work as a wealth creation factor, only 85 percent of Millennials listed that as a factor, which might cause some to raise those questions about “soft’’ Millennials once again.

Another wealth creation factor Millennials credit less often than others is “smart investing”, which 77 percent of the general population of investors give credit. Only 66 percent of Millennials offer that as a factor, which suggests they are not making smart investing decisions on their own or perhaps using advisor services which are not known for strong wealth creation performance.

It is noteworthy that while 38 percent of all investors credit “decision made for me by my financial advisor” as a wealth creation factor, only 32 percent of Millennials do so.