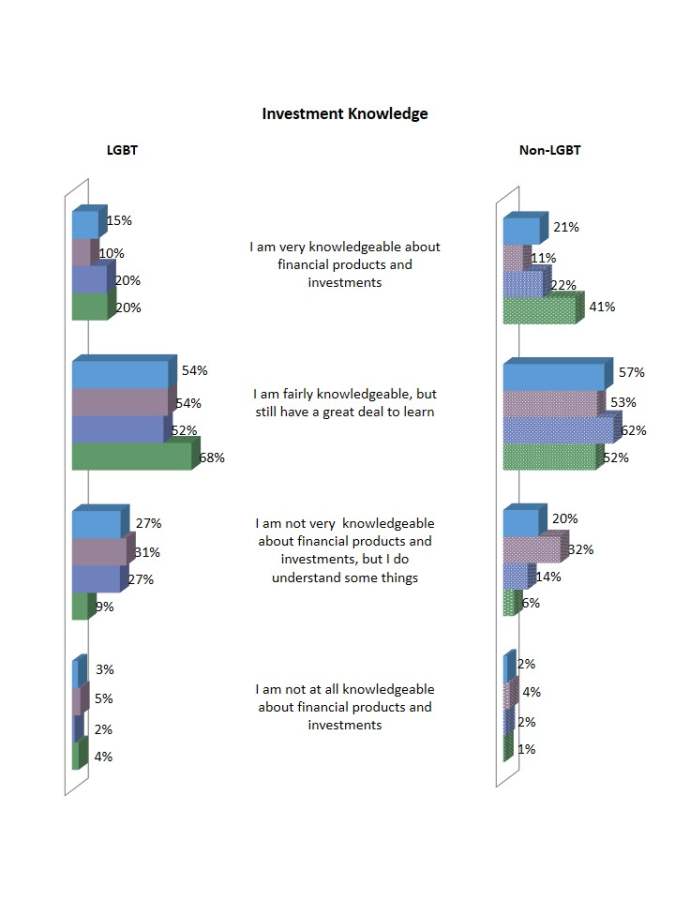 Affluent LGBT investors are less confidence in their investment knowledge than their non-LGBT counterparts, according to a new Spectrem study.

The same holds true for non-LGBT investors. Eleven percent of non-Millionaires consider themselves very knowledgeable about financial products and investments, compared with 22 percent of Millionaires and 41 percent of High Net Worth investors with a net worth of at least $5 million.

The study found that perceptions of financial knowledge level out among LGBT and non-LGBT investors who profess to be fairy knowledgeable but still have a great deal to learn, 54 percent vs. 57 percent. The largest discrepancy is found between High Net Worth investors, with nearly seven-in-ten LGBT respondents saying they are fairly knowledge with a great deal to learn compared with 52 percent on non-LGBT investors.

The lack of confidence expressed by LGBT investors may be attributed to the relatively complex legal environment that impacts their legal rights and ownership of their assets. Gay marriage is legal in 17 states. Married same-sex couples living in one of these jurisdictions now have the identical rights, responsibilities, and obligations as all other married couples. Nearly eight-in-ten (79 percent) of respondents said they are concerned about legislation regarding LGBT financial rights and opportunities, while two-thirds express concern about tax implications for themselves and their partner.