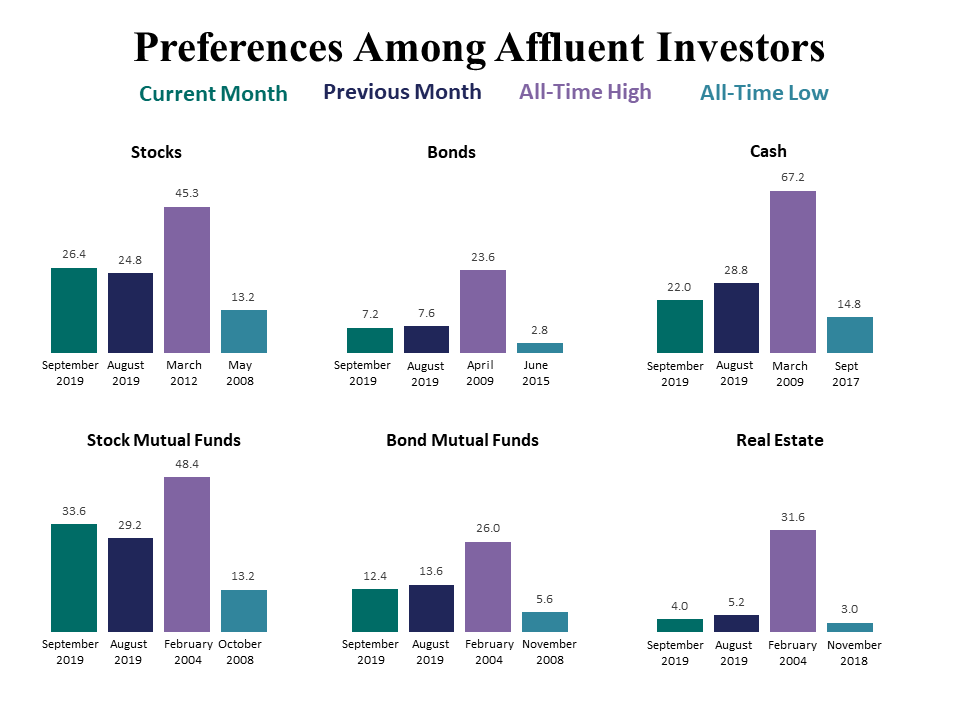 The talk of an impending American economic recession receded in September, and investors responded by returning to a more active mode of investing as summer turned to fall.

The Spectrem Investor Confidence Indices for September recorded notably higher interest in equity investing among both Millionaires and non-Millionaires and a much lower investment in cash products, suggesting that investors again see positive signs that lead to investing again in the stock market.

The Millionaires and non-Millionaires nearly matched each other in September’s increased investing intentions, which is an indication that the high levels among the stock market indices were seen as positive signs by both wealth segments.

It is not often that market conditions prompt both Millionaires and non-Millionaires to react similarly, but that was the case in September. Both wealth segments noted increased interest in individual stock and stock mutual fund investing, and reduced interest in investing in cash products.

Interest in stock mutual fund investing rose even more among both groups, and went from 33.6 percent to 39.5 percent among Millionaires.

The cash investing percentages are key indicators of investor confidence, and there has been a year-long movement toward increased cash investing as investors guard against market volatility and recession concerns. However, Cash investing in September was reduced to 22 percent of investors adding to those products, after peaking at 28.80 percent in the previous month.

In both political segments, there was a slight increase in not investing, and among Democrats, that level reached almost 50 percent, to 46.67 percent.

It is perhaps noteworthy that among Independent voting investors, those not investing got even closer to 50 percent, at 48 percent, while reporting an almost 6 percent increase in investing interest in individual stocks.

Otherwise, working investors increased their intention to invest in mutual fonds, both stock and bonds, while retired investors decreased interest in all other components of the index, most notably in individual bond investing, from 7.5 percent to 2.9 percent, the lowest level of the year.

Those not investing rose in both employment segments, from 57.0 to 61.5 percent among retired investors and from 21.4 percent to 25.6 percent among working investors.