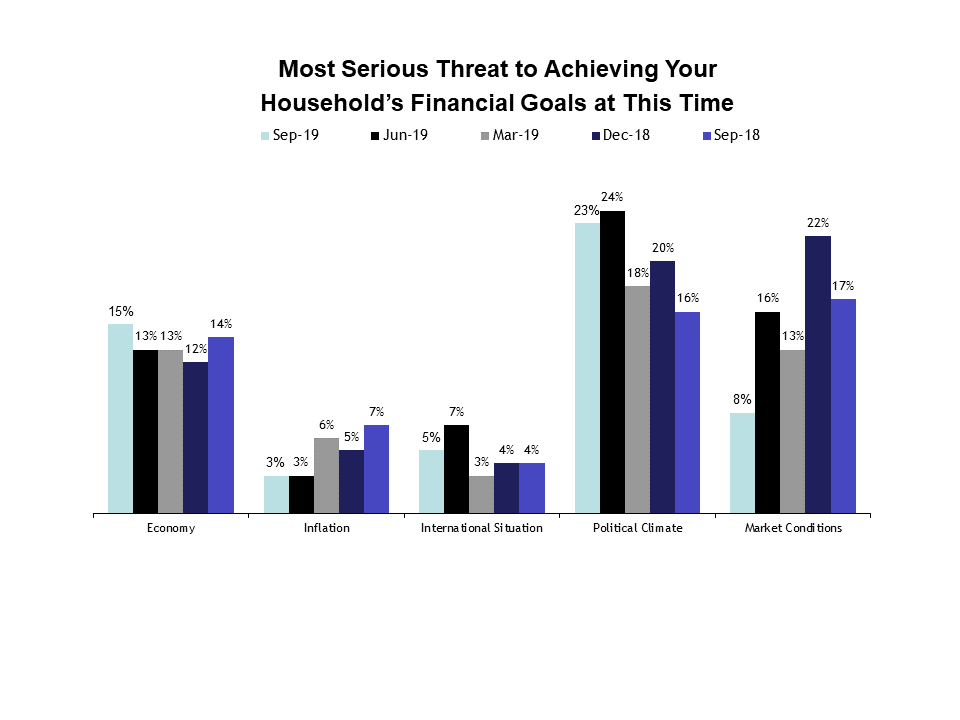 Once a month, Spectrem asks investors with a net worth over $100,000 a single question that points to their primary concern.

In September, Spectrem asked investors one of its rotating three questions: “What is the most serious threat to achieving your household’s financial goals at this time?” For the month of September, and for most of the past two years, the response was “the political climate”.

Given the opportunity to state one concern, 23 percent of all investors pointed to the political climate as the issue impacting their financial situation at home. The question was asked of investors between Sept. 17 and Sept. 23, when the word “impeachment’’ grew in importance as details came out about President Donald Trump’s phone conversation with the president of Ukraine.

But the complexity of today’s world actually caused the percentage of investors pointing to the political environment to drop by one percentage point from the last time the question was asked in June. While the percentage of investors saying the political environment was the No.1   problem dropped from 24 percent to 23 percent in that three-month span, there was a corresponding increase in investor who responded “the economy”’ as the No. 1 problem, with that percentage rising from 13 percent to 15 percent of all investors.

It was only about one month ago that the Treasury bill yield curve inverted for the third time over the summer, causing economists to declare the rising potential for a recession. When 2-year notes are more valuable than 10-year bonds, there is a problem with the growth of the economy, and investors really turned to cash products as investment vehicles to protect themselves against that concern.

Through all of the turmoil of the summer, the stock market somehow managed to stay on a bullish roll. In mid-September, the S&P 500 set an all-time high, and both the Dow Jones Industrial Average and the NASDAQ stayed close to their own record marks. That flourishing is probably why only 8 percent of investors pointed to the market as the No. 1 problem in their household financial picture, well below the 22 percent who pointed to the market as the top issue back in December when the Dow Jones lost 4,000 points in a month.

And tariffs? Only 5 percent of investors consider the global negotiations, which now include matters involving the government of England and its relationship with the rest of Western Europe, as the No 1 problem impacting their personal finances.