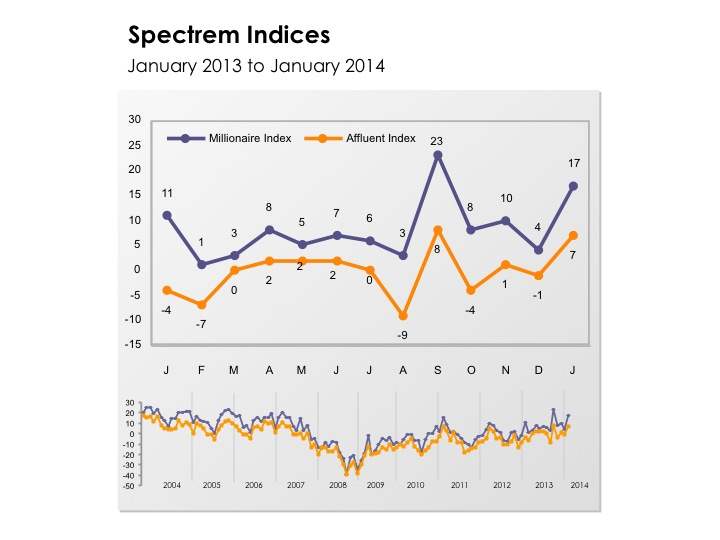 The Spectrem Index is celebrating a birthday. This marks the 10th anniversary of the Spectrem Affluent Investor Confidence Index (SAICI®) and its accompanying Spectrem Millionaire Investor Confidence Index (SMICI®). The indices measure the investment confidence and outlook of households with more than $500,000 of investable assets and more than $1 million of investable assets, respectively.

What a difference a decade makes. In February 2004, the SAICI was at 17. In January 2014, it posted a reading of 7. During this period, the indices have reflected the mindset of the Affluent investor and their confidence in the markets and the direction of the economy.  Fears have ranged from the market to political issues to the impact of the Gulf Oil spill.

“We created the SAICI and SMICI because we felt that consumer confidence indexes with which people are familiar (such as the Thomson Reuters/University of Michigan’s Survey of Consumers) do not really represent the wealth market that we cover,” said George H. Walper, Jr., President of Spectrem Group. “We decided to isolate that market which controls 70 percent of the assets held by individuals in the country. They have a much bigger impact on the economy, the markets and job creation.”

For the first six years of the index, surveys were conducted by telephone before switching to online, as this form of research became more accepted by consumers. “The indices still provide our readers and financial advisors with a pulse of what wealthy Americans are thinking about the economy and investing." The indices also provide a forecast of how investors are thinking of investing. Will they remain in cash? Bond funds? Other?

That inaugural reading of 17 was a benchmark for the SAICI as yet unmatched. At its depth, the Index fell to -39 in November 2008 just following the economic collapse.

What are the differences between the two segments?  Historically, Millionaire investors tend to lead their Non-Millionaire counterparts when it comes to a more positive economic sentiment. Only twice has the SAICI posted a better reading than the SMICI. The first time was in April 2008, when the SAICI was at -13 compared to the -14 reading for the SMICI. At that time, the stock market had rebounded and the Dow has passed the 1300 benchmark for the first time in over a month, and Non-Millionaires focused on these short-term gains.

The second time the SAICI bested the SMICI was in the eventful month of May 2011, when the news of the assassination of the long-elusive Osama bin Laden was tempered by the U.S. reaching its debt ceiling, which prompted Treasury Secretary Tim Geithner to urge Congress to raise the debt ceiling "to protect the full faith and credit of the United States and avoid catastrophic economic consequences for citizens." But partisan gridlock prevented action on this issue at the time. The political environment, Affluent survey respondents said, was the news story that was most impacting their investment outlook.

Over the past decade, the indices were tied three times when the country was gripped by the economic collapse and subsequent recession: November 2008 (-39), February 2010 (-10), June 2009 (-20), when the recession—then at 18-months in duration—was declared over.

Over the next several months, the Indices see-sawed as Affluent investors’ confidence improved and then wavered. The SAICI gained five points in September (for a reading of -13, at the time a four-month high), only to lose five points in December, when there was media coverage about the financial impact of the proposed Affordable Care Act, which would be signed into law in 2010.

As reflected in the indices, Affluent investor confidence has become stronger since 2010.

That year, the SAICI posted negative readings in all 12 months. That improved to 9 months in 2011, only to tick downward to 10 months out of the year in 2012. But in 2013, the SAICI was in negative territory for only five months and never fell below -9.

As goes government gridlock, so goes the indices. In November 2012, for example, when Congress was at odds over reaching agreement over the fiscal cliff prior to the year-end deadline, the SAICI dropped from -2 the previous month to -13. Similarly, the partisan debates over government spending that led to the 16-day government shutdown in October 2013 sent the SAICI from 8 in September to -4.

The February SAICI will be released at the end of the month, and it will be an indicator how Affluent investor confidence will stand up to the market downturns that have been prevalent in the New Year. Before the recent rash of market setbacks, Affluent investors had been upbeat, as reflected in the January SAICI reading of 7, a gain over the previous month of 8 points, the biggest month-to-month increase in five months. The SMICI surged 13 points to 17.  It will be interesting to see how investors react to the recent fluctuations in the market.