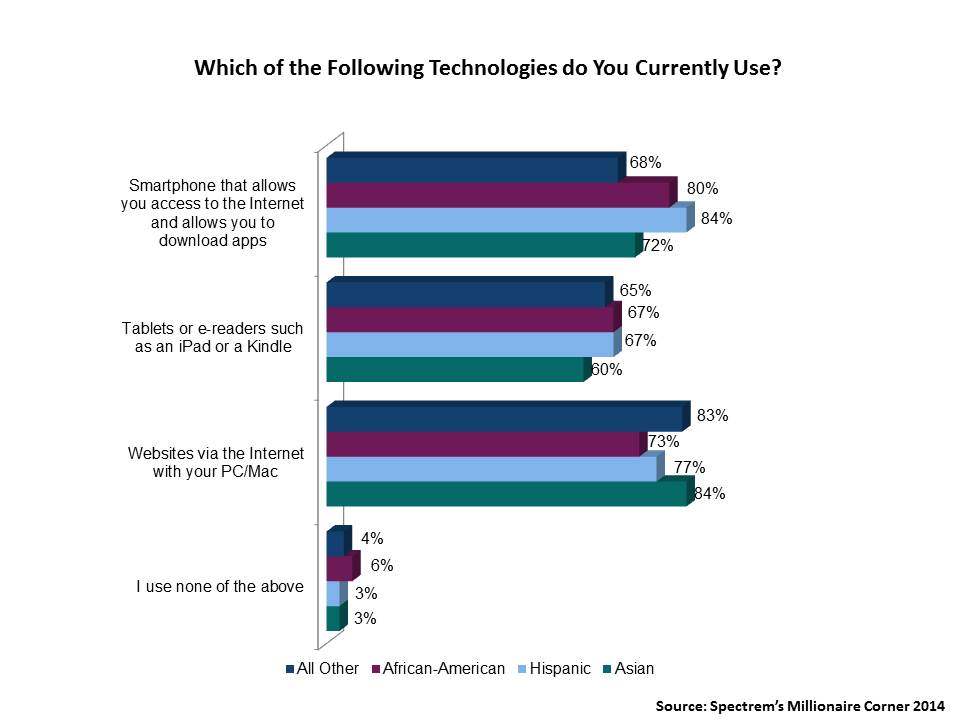 Smartphones have emerged as the mobile technology of choice, particularly among Hispanic investors. Eighty-four percent reports using a smartphone that allows Internet access and the ability to download apps. Eight-in-ten African-Americans similarly use a smartphone, followed by 72 percent of Asian investors.

Asians are the most likely to access websites via their PC/Mac (84 percent), followed by Hispanic investors (77 percent) and Blacks (73 percent).

Tablet or e-reader usage is lagging among ethnic investors, with Asians the least likely to use these devices (60 percent) compared with their Black and Hispanic counterparts (67 percent each).

Just over a third of African-American and Asian investors are on their PCs/Macs between 25-50 hours a week, compared with 28 percent of Hispanics. The largest percentage of these investors uses their smartphones for purposes other than texting, emailing or telephone calls less than five hours per week.

The highest percentage (28 percent) of ethnic investors who use their smartphones between 6-15 hours or between 16-25 hours (29 percent) are Hispanics.

Security is an issue with ethnic investors surveyed. They find using a smartphone for payment significantly less safe than using a credit card, the Spectrem Group report finds.

To read more on the Ethnic Segmentation study, click here