Blog - Is Your Child a Snowflake: Or When Should a Child Become Financially Independent?

In recent months the definition of “snowflake” has changed from a beautiful flake of cold and icy precipitation to a college-age child who seeks “safe spaces” away from the challenges of the real world.  In most cases, “snowflakes” are deemed to be children who have been coddled by their parents, are studying in expensive colleges, and who are protesting against the values being touted by the Trump administration or the values of their parent’s generation at the very least.  Sound familiar?  In the 1970’s I think they were called “hippies” and some of us may know a former hippie or two.

Regardless of whether you find the term “snowflake” offensive or descriptive (or if you still think of it as a form of precipitation), the question of how long a child should be financially dependent upon their parents is just as controversial.  Generationally, many of us remember a time when once you graduated from high school, or for those of us who were lucky- college or graduate school, the money train was empty.  I’ll never forget the knot in my stomach at law school graduation wondering if my Dad was going to spring for my next month’s rent….because I hadn’t yet had time to earn the money to pay for it.  My own children have never had to experience that fear, and I’m not sure if that is good or bad.

Spectrem Group asked 350 wealthy women (those with more than $1 million of net worth) when they felt a child should no longer depend upon their parents for financial support.  Almost half (49%) felt that children should no longer be dependent upon their parents after completing college or their technical education.  An additional 14% felt that they would support their children until they finished graduate school.  Sixteen percent identified that their support would stop “at a specific age” and 21% identified the end of support as “Other”……which could mean before college or long after. 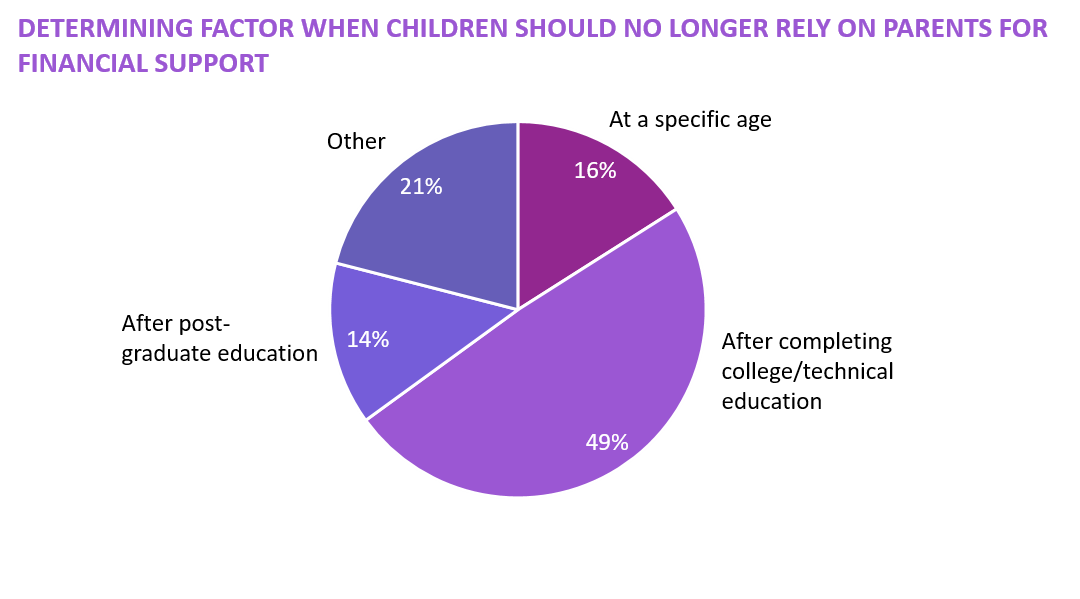 We asked more specific questions regarding what parents should be willing to pay for and which items were not popular.  Ninety-four percent of wealthy women believed they should help their children pay for college and 28 percent supported paying for graduate school.  About half (48%) will help their child purchase their first automobile but only 39% will help with the purchase of a first home.

What do you believe?  For me, although my parents helped me out all the way through graduate school, I also took out as many student loans and used other financial aid to the extent it was available.  I worked all summers, had work-study jobs and worked during graduate school.  But I have been a lot nicer to my own kids.  They have been able to avoid student loan debt and have had summer jobs, although I also reluctantly let them take advantage of non-paid internships that were appropriate to build their resume.  But we didn’t buy them a car….they have access to our 10 year old cars but will have to buy their own when they are appropriately employed.   And as for helping them with a house…..I think I need to cover my retirement first.  Are they snowflakes?  I don’t think so…

But we all have different experiences and values when it comes to teaching our children financial independence.  Sometimes life just happens and you don’t have a chance to draw a line in the sand.  Soon I will have my own child graduating from law school….and, just as my Dad did, I will pay for that last month of rent until she has had time to accumulate enough to pay her rent.  But I’m not paying for Month 2!!