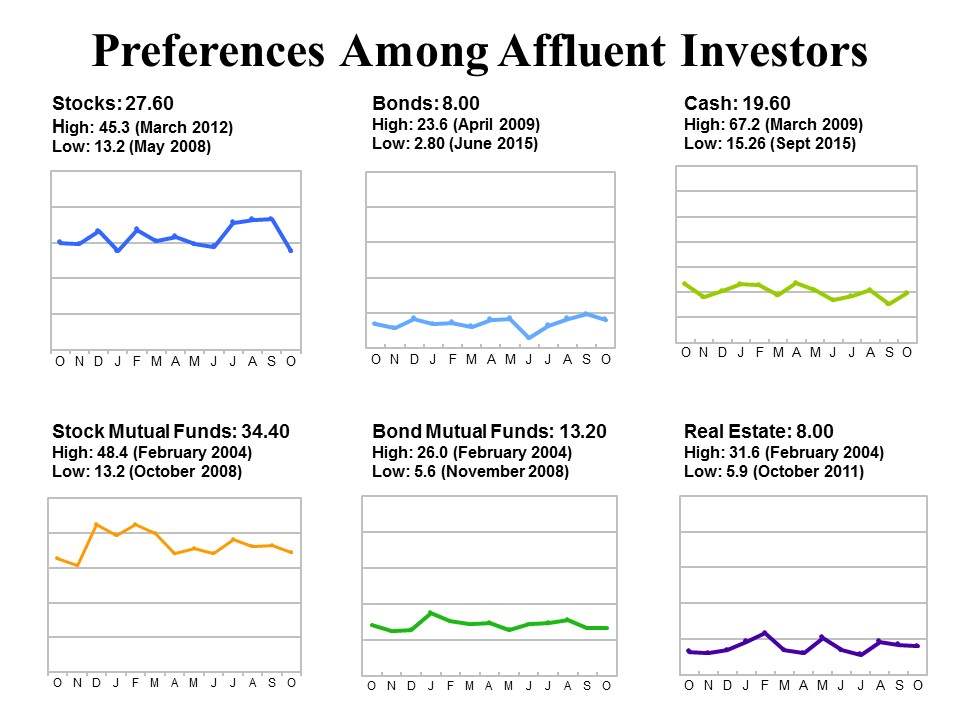 Though the political climate and 2016 presidential race, still in its early stages, dominate the 24-hour cable news channels, Affluent investors seem to be tuning out divisive rhetoric and campaign stump speeches to focus on issues that directly impact their portfolios, new Spectrem research finds. When asked in October which one factor is most affecting their current investment plans, three-in-ten responded Stock Market Conditions.

This response has been consistent over at least the past three years, with the response to this question reaching as high as 38 percent in October 2014. That was a time of extreme volatility, when, during one near-month-long stretch between September and October of last year, the Dow Jones industrial average lost more than 1,100 points.

On Aug. 24 of this year, the Dow suffered its worst day since August 2011, and in September, the markets were further rattled following an announcement by the Federal Reserve that it would not, as some speculated or forecast, raise interest rates that month. Year-to-date as of this week, the NASDAQ was up 6.2 percent, the S&P 500 up 0.3 percent and the Dow Jones industrial average down 1.4 percent.  In August, U.S. stocks closed out the third quarter down about 7 percent for the three-month period.

Following Stock Market Conditions, the second highest percentage of Affluent investors indicated that Retirement is the primary factor most affecting their investment plans today. Retirees, especially, are affected by low interest rates because in many cases, they are living off of the interest gained from their savings vehicles. In a bid by the Fed to stimulate the economy following the economic collapse, interest rates have been at below 1 percent since December 2008.

Stock Market Conditions and Retirement supersede other issues referenced by Affluent investors. Ten percent said that the Economic Environment is the one factor most affecting their investment plans today, unchanged from three months ago when this questions was last asked.

ust 6 percent responded Household Income, while a scant 3 percent said the Political Climate. It remains to be seen if this figure will surge as the presidential race intensifies and the last candidates standing lay out their stances on the economy.