When Corporations Speak Out 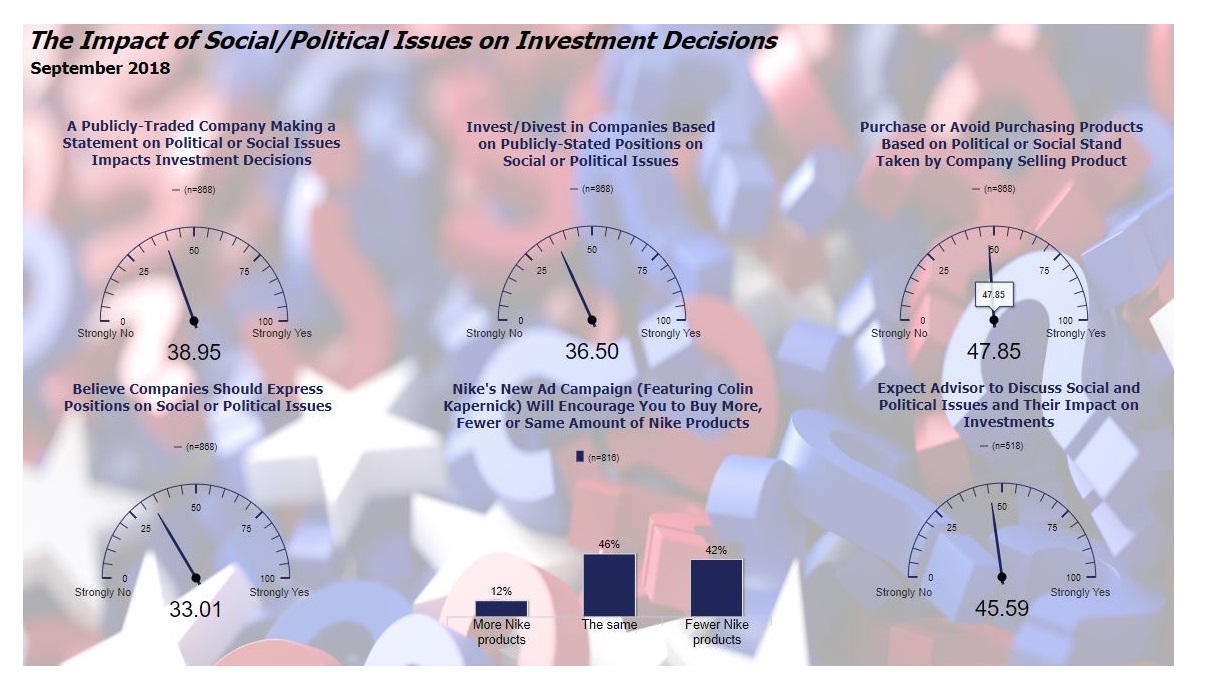 During the week of Sept. 3, Nike announced it signed controversial former NFL quarterback Colin Kaepernick to an advertising deal prior to the start of the NFL season. Immediately, the Nike stock price fell 2.5 percent, but by the end of the month, after the commercial with Kaepernick was viewed publicly, a company survey indicated Nike had sold 61 percent more merchandise in the three-week period following the ad than they did in a similar period one year prior.

Nike is not the first publicly traded company to take a stand that is considered controversial by some investors and wholly appropriate by others. Those companies make a gamble that their consumer base will either side with them on the issue or not turn against the company for indicating support for one political or social issue or another.

The question that matters is whether such statements of support actually matter to investors or encourage consumers to buy or stay away from products as a result.

In its monthly survey of investors with a net worth between $100,000 and $25 million (not including primary residence), Spectrem asked about the impact of corporations making statements on social or political issues similar to what Nike did. The first question was whether a move similar to Nike’s by a publicly traded company would impact investment decisions, and the responses were put on 0-to-100 scale to indicate the level of impact. Investors overall placed that effect at 38.95, which is not an overwhelmingly positive response to the question but also does not totally disavow the question, either.

This is a question where disparity might be expected when investors are segmented. For example, Senior Corporate Executives were more likely to be impacted by a social statement from a corporate entity (42.25) than Educators (30.76). that makes sense, because Senior Corporate Executives understand just how a statement can cause investor consumers to support a boycott of that company.

The results of the survey are available on Spectrem’s Investor Profile Tool, a part of its Wealthy Investor Series of studies and investor research.

At the same time, younger investors were more likely than older investors to indicate that such a statement from a publicly traded company would impact investment decisions. Gen Xers rated their potential impact at 47.96, while Baby Boomers rated their own feelings about such public statements at 37.52

Should companies make such statements? Investors don’t think so. Again, on a 0-to-100 scale, with “0” representing a “no’’ response and “100” indicating a “yes response, investors came in at 33.01, suggesting publicly traded companies should stay out of the social or political arenas, at least publicly.

While public statements or gestures in support of political or social issues may impact investing, does it impact purchases? A person can be one kind of investor and another kind of consumer. Asked if their purchases would be impacted by political or social statements by a product manufacturer or company, investors placed their 0-to-100 no-to-yes response at 47.85, which indicates there is not a strong overall feeling one way or the other on that question.

The answer was similar when investors were asked if they expect their advisor to discuss social and political issues when talking about investments. The answer to that question also sat squarely in the middle at 45.59.