The Wealth Numbers Continue To Grow 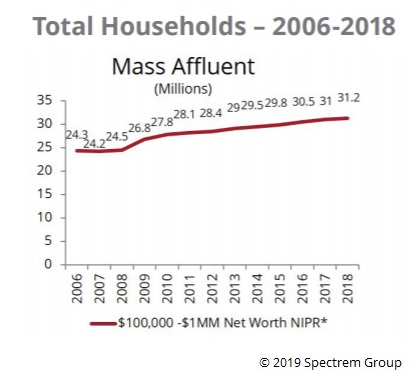 During a tumultuous year in American economic news, the number of wealthy Americans continued to grow.

For the 10th consecutive year, the number of wealthy U.S. households reached a new high, according to Spectrem Group’s Market Insights 2019. The number of households with a net worth of $1 million or more, not including the value of the primary residence, rose to 11.8 million.

The Spectrem Market Insights report analyzes changes in the number of affluent American households based on net worth, from the Mass Affluent ($100,000 as the minimum) to the $25 million plus segment. The report also includes information about the investment habits and behaviors of affluent and wealthy investors based on advisor usage and occupation.

Other notable increases include:

The growth among those with a net worth over $25 million indicates that wealth growth in America is slowing. While approximately 1,000 more households reached the $25 million mark in 2018, the previous year saw an increase of 16,000 households in that wealth segment, so the 2019 report indicates an extreme reduction in the sheer number of additional wealthy investors in America.

“In 2018, the increase in the number of U.S. wealthy households slowed as a result of weakening global economic growth and a contentious U.S. political environment,” said Spectrem Group President George H. Walper, Jr. “While net household wealth among affluent investors continued to increase last year, it did not match the pace it had experienced in prior years. Despite this, the total number of households in the upper wealth segments in the United States has nearly doubled since the onset of the global financial crisis in 2008.”

Market Insights 2019 includes synopses of Spectrem’s research on affluent and wealthy investors from 2018.