The Tax Return Numbers Are In 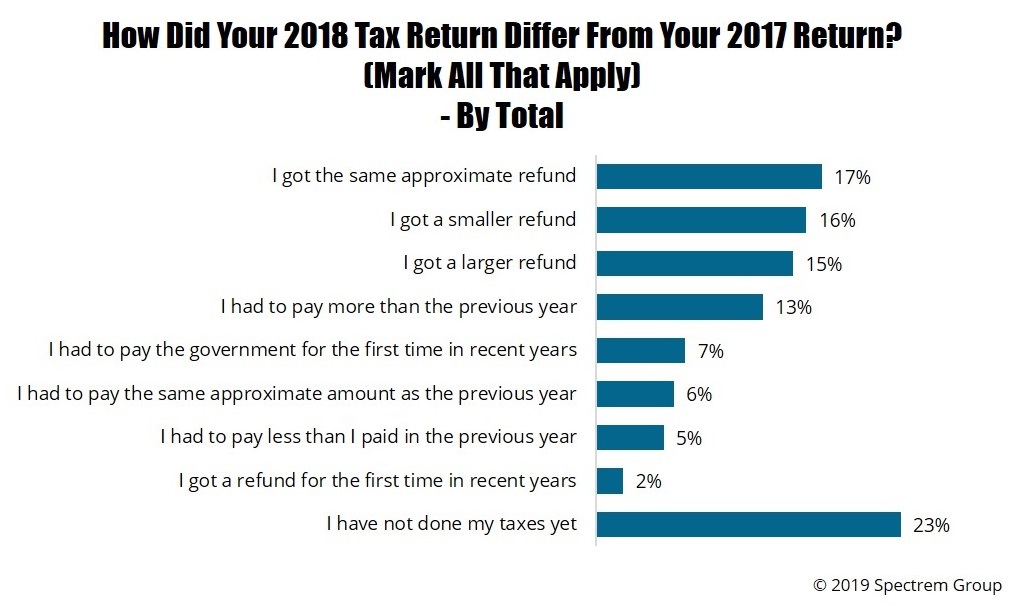 Approximately 10 days after personal tax returns were due barring extension requests, the Internal Revenue Service released their findings on how those returns were different in 2019 than they were in 2018.

Individual tax returns were affected by the Tax Cuts and Jobs Act enacted in early 2018, which doubled the standard deduction for taxpayers, eliminated certain itemized deductions, eliminated the personal exemptions, and lowered the individual income tax rate. It also placed a limit on the deduction of state and local taxes, which were a key tax benefit for citizens of California, Illinois, New York, New Jersey, and Texas.

The corporate tax rate was the more significant change, dropping from 35 percent to 21 percent beginning in 2018. Those tax cuts were enacted to be permanent.

In its monthly survey of investors with a net worth between $100,000 and $25 million (not including the value of their primary residence), Spectrem asked just how the new tax laws impacted tax returns for 2018. The answers demonstrate a wide range of responses.

There are three positive responses to the change in tax laws: a larger refund, a smaller tax bill, or a refund for the first time in years. Only 22 percent of investors reported one of those three positive results from the new tax laws.

There are also three negative results to the new tax laws: a smaller refund, a larger tax bill, or having to pay taxes for the first time in years. Among those choices, 36 percent of investors reported such an occurrence.

However, the converse result was reported for investors with a net worth between $15 million and $25 million, the wealthiest investors in the survey. Forty-four percent of those investors reported a positive outcome from the new tax laws while only 20 percent reported a negative result.

More information about investors and their tax returns are available on Spectrem’s Investor Profile Tool, an online analytics program which is available as part of Spectrem’s Wealth Spectrem research package. Details can also be read in Spectrem’s High Net Worth Insights Journal.