The Slow Advance of Robo-Advisors 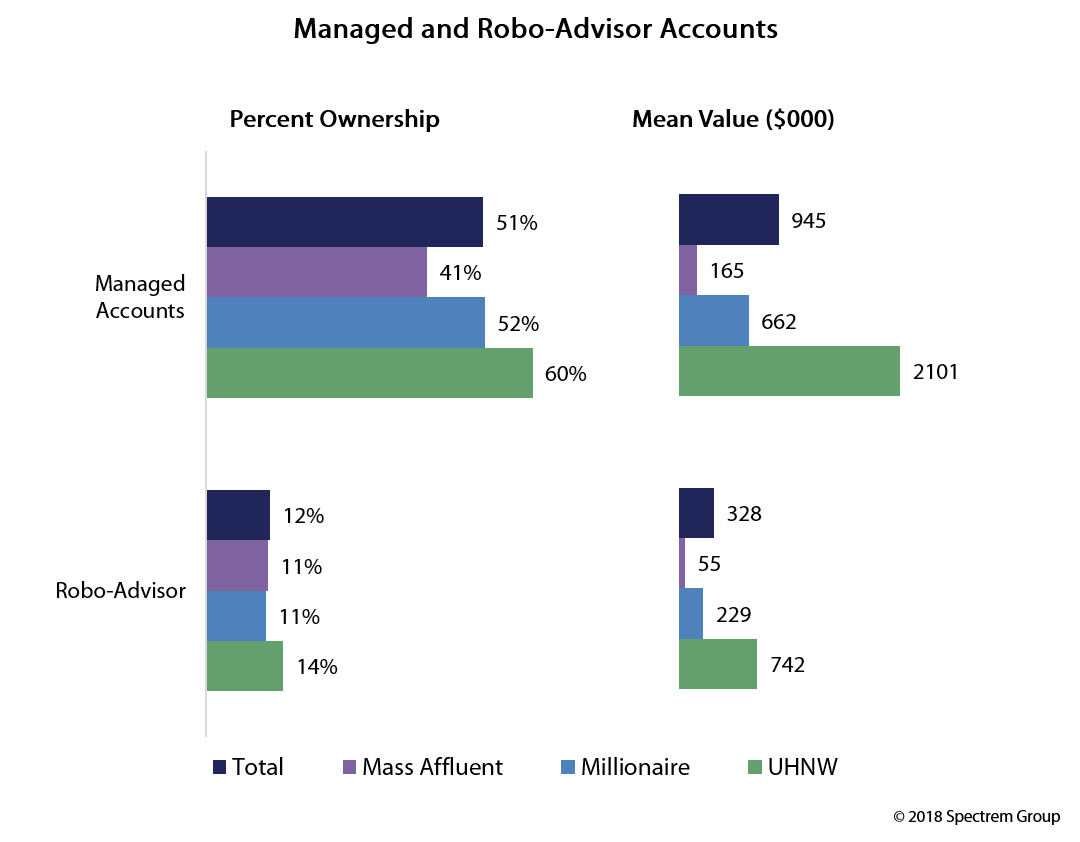 How long has it been since financial advisors faced the threat of elimination by technology?

It was only 10 years ago that the first robo-advisors, the online digital financial advice services that eliminates human interaction, came into existence. Spurred by young investors who are technologically savvy and wary of being taken advantage of by human advisors, robo-advisors have eaten into the market for personal advisor services and caused the entire industry to change and adapt to new strategies.

But the threat of robo-advisors is not advancing as swiftly as it was originally thought to do. Use of robo-advisors continues to grow among young investors, but the older investors have not accepted the service model as a tool they wish to use. The response by many financial providers to combine human and robo-services has adjusted the fear in the industry of a complete digital takeover.

Spectrem’s annual study on the assets of affluent investors shows that growth in the use of robo-advisors has been slow, and only a small percentage of investors actually use the digital services.

In Asset Allocation, Portfolios and Primary Providers, Spectrem finds that only 14 percent of Ultra High Net Worth investors with a net worth between $5 million and $25 million use a robo-advisor. The average invested with the robos among that group of investors is sizable, however, at $742,000.

Two years ago, only 8 percent of UHNW investors were using robo-advisors, but that growth among the wealthiest investors is the highest change in the two year period.

Is this an indication that financial providers have found the answer to combat the turn to algorithm-driven financial advice? Or is the growth of 1 to 2 percent a year still concerning to the human advisors who must battle robos for clients?

At the same time growth of robo usage has been slow but steady, the use of managed accounts by human advisors has dropped at rates similar to the growth in robo services among both Mass Affluent and Millionaire investors, but has grown among UHNW investors. For UHNW Investors, managed account use has grown from 55 percent in 2015 to 60 percent in 2017. However, Mass Affluent investor use of managed accounts has dropped 5 percent, from 46 to 41 percent, and among Millionaires, it has dropped from 53 percent to 52 percent (although the amount of assets turned over to advisor accounts has grown by $40,000 per advisor on average).

The question begged by the use of robos by young investors is whether they will maintain that relationship as they get older and their investments, perhaps, get more complicated or extensive. Can advisors attract these younger investors to expand their use of human professionals?

The only thing we have all been taught in every aspect of our lives is that technological advances are not going away. No one goes back to writing checks to pay bills after doing so electronically. But that may not be true in regards to the relationship between robo and human advisor usage. The key is for advisors to demonstrate and explain the advantages in terms of both finances and security in using a human advisor over a digitally driven one.

At the same time, many firms are promoting the idea of using both types of services to make the most of their money spent on financial advisor services. A balance between robo advisor and human advisor can be struck and may be the future for many affluent investors.