The Role of Estate Taxes On Inheritance 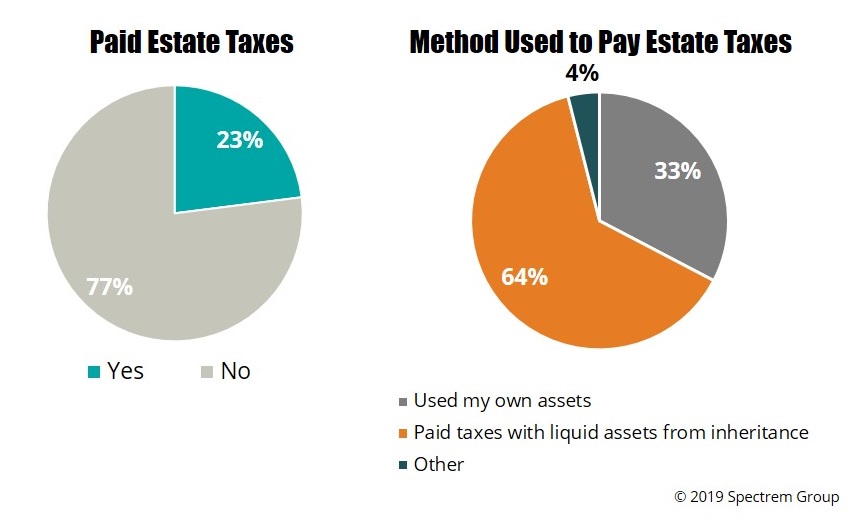 There are wealthy people in America who are wealthy in part because they received a sizable inheritance. Those people also might have had to pay estate taxes when their inheritance was received.

Spectrem’s new study on inheritance and wealth transfer describes the details related to receiving assets in an inheritance and their own plans for transferring their wealth to beneficiaries someday. Legacy 2.0: Baby Boomers and Inheritances is designed to show the way inheritance was received in order to create a desire among investors to work with advisors in order to make their own estate transfer details go more smoothly.

The study looked at investors from the Baby Boomer generation with a net worth of $1 million who inherited at least $500,000, but for the purposes of dealing with estate taxes on a federal level, they have to have inherited more than $11 million in 2018. That amount doubled from 2017 to 2018 as part of the new tax laws instituted by the Trump administration at the end of 2017.

There are different laws regarding estate taxes among the 50 United States and the District of Columbia that also must be considered.

Among the study participants, 23 percent were required to pay estate taxes. There was only a slight difference (20 percent to 24 percent) among those who received their inheritance as part of a trust opposed to those whose inheritance was not received from a trust.

Of those who had to pay estate taxes upon receiving their inheritance, 67 percent paid federal taxes and 87 percent paid state taxes. Advisors working with investors for whom an inheritance is anticipated needs to consider the state laws, which vary widely from state to state, when discussing investment intentions with their clients prior to the day when the inheritance is passed on.

But 33 percent of all inheritors used their own assets to pay the estate tax bill.

Part of the challenge of receiving an inheritance as it relates to estate taxes is when part of the inheritance comes in the form of illiquid assets like real estate or collectibles. The value of those items is figured into the amount received, and that requires an appraisal of the items be conducted in order to determine the inheritance amount.

Among the inheritors in the Spectrem study, 46 percent received at least a portion of their inheritance in the form of illiquid assets.

The value and appraisal of illiquid assets is another topic about which advisors and clients should talk when assessing a portfolio that is anticipated to be passed on to beneficiaries.