The Retirement Accounts Investors Own 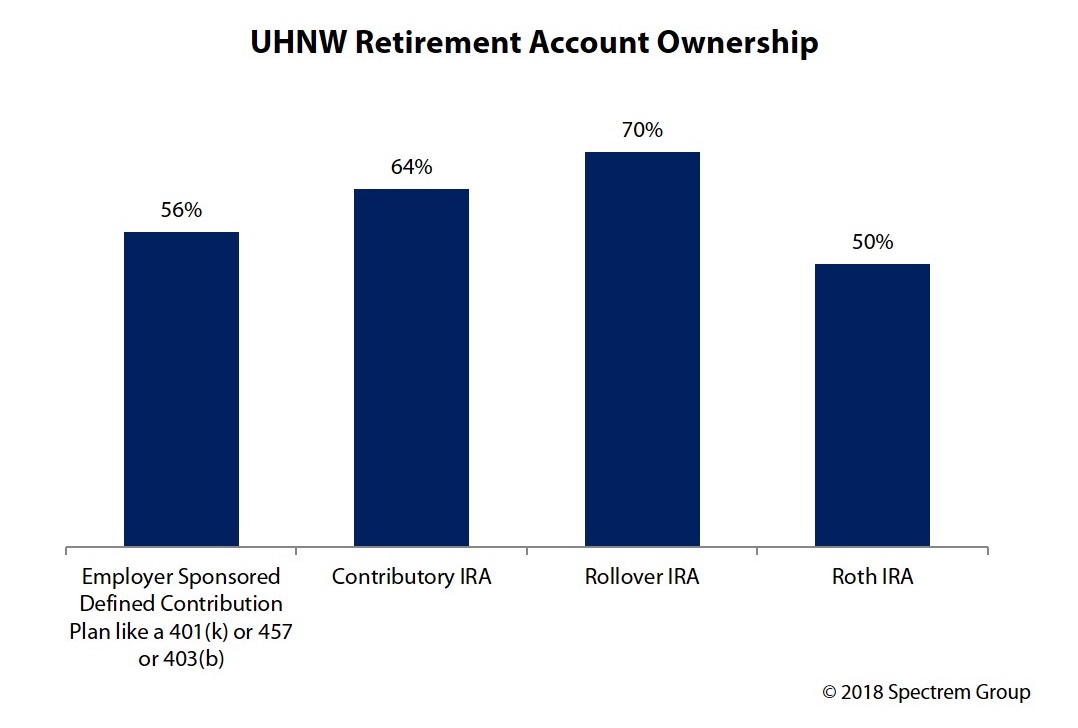 There are numerous ways affluent investors save for retirement and develop retirement income streams that will satisfy their needs when they stop working.

Individual Retirement Accounts are one of those ways, but they are not ubiquitous.

Spectrem’s new study on product ownership among affluent investors shows advisors just how affluent investors use retirement accounts and what particular products they purchase within those accounts. In Asset Allocation, Portfolios and Perceptions of Providers, investors list the wide array of products and services they own, and perhaps more importantly, those products and services they don’t own.

“Advisors can learn from the study the extent to which wealthy investors use IRAs to support their retirement income flow,’’ said Spectrem president George H. Walper Jr. “Thanks to the segmentation of the report, advisors can determine which investors are more likely to own or want to own IRA accounts based on age, wealth level, advisor dependency and occupation. This information can go a long way toward initiating conversations about retirement income preparation or determine just what direction an investor wants to go in terms of retirement financing.”

A look at Ultra High Net Worth investors, with a net worth between $5 million and $25 million, provides the best example of the diversity of an investor’s asset distribution and what portion is directly aimed at retirement.

According to the study, 72 percent of an UHNW investor’s total assets is investable assets. Unlike less wealthy investors, UHNW investors have a smaller percentage of their assets tied up in the principal residence.

Of the investable asset pot of money, the average UHNW investor has 25 percent directed at rollover, contributory or Roth IRAs. That is the highest percentage of assets based on a list that includes mutual fund investment (23 percent), stock and bond ownership (19 percent), professionally managed accounts (18 percent), and deposit accounts (9 percent).

The greatest value in the study is in the segmentation, where it is shown that the older the investor, the higher percentage of investable assets is in IRAs and less is in professionally managed accounts. Does that mean older investors consider IRAs as a more stable form of retirement preparation that working with an advisor?

The study also shows that Professionals and Senior Corporate Executives have a higher percentage of their investable assets in the IRAs than do Business Owners and investors in other occupations. This is especially telling for Professionals, who often do not start out with 401(k) accounts from their initial employment stages and are thus investing specifically in IRAs somewhere along the line.

In terms of the types of IRAs the UHNW investors own, 70 percent have rollover accounts (a consistent percentage among all age groups), 64 percent have contributory IRAs and 56 percent have funds in employee-sponsored defined contribution plans. The 401(k) accounts are most popular among younger investors who are still in their full-time work status.

It is noteworthy that only 52 percent of UHNW investors have life insurance policies, and 25 percent have variable and/or fixed annuities as another form of retirement income.

Advisors can also do battle with any preconceived notions an investor might have regarding certain retirement products. Noting the tax advantages of one over another and the ease of distribution in each case can lead an investor to make certain decisions they otherwise might not make.