The Investment Strategies of Wealthy Investors 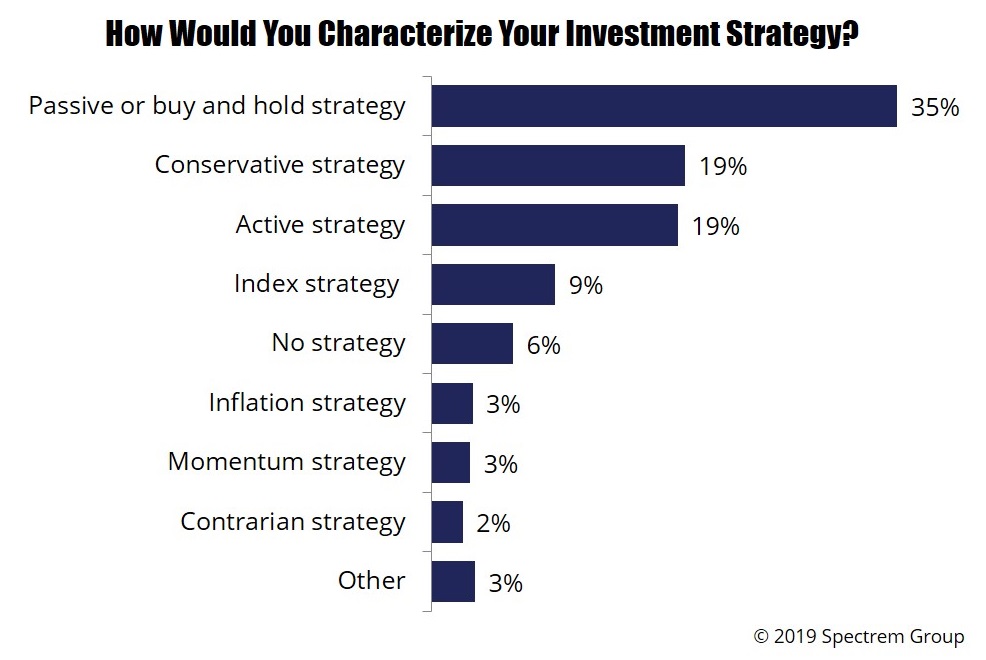 Some investors admit that luck or being in the right place at the right time led them to be as wealthy as they are. But for most investors, strategy comes into play when investors determine how to invest their available assets.

Spectrem’s Perspective Primary Objective of Portfolio asked investors with a net worth up to $25 million to describe the primary strategy they use when they invest. The investors were segmented by age, wealth level and advisor dependency to determine if any of those factors impact an investor’s strategy.

“Many investors operate with pockets of investable assets, with one large pocket for safe investments aimed at income for retirement or security in retirement, while another pocket is for riskier products aimed at a greater rate of return,” said Spectrem President George H. Walper Jr. ”But most investors have a primary strategy they use to achieve the primary goal they are aiming at.”

Investors were given a choice of seven different strategies generally accepted to be followed among most wealthy investors. They were also given the opportunity to say they use no strategy, which 6 percent of investors admitted to.

But the significance of the study is that most investors have a plan, and their plan revolves around how involved they want to be in the process of operating an investment program, as well as how willing they are to risk a portion of their assets for a greater rate of return. There are implications for advisors depending on the strategy an investor chooses as their primary focus.

A passive strategy is not necessarily a lucrative one for advisors, because it limits an investor’s expenditures on fees (while also holding down transaction costs for the investor). Investors employing a passive strategy often prefer investments in mutual funds or exchange-traded funds to take advantage of the anticipated rise in the markets over the long-term, while eliminating the concern over the loss of principal. It’s a very safe way to be invested in equities over bonds, for example.

The next two most popular strategies are opposing ones: active and conservative. Each was chosen by 19 percent of investors as their primary strategy.

Like investors using a passive strategy, investors using a conservative strategy do not want to put their principal investment at risk. But, according to the study, they are willing to be more involved in the investment process, aiming for the most profitable low-risk investment available, and they are not so directed to avoid transaction fees and advisor fees as long as they are making money on the transaction or product change.

The active strategy is the one that Hollywood likes to portray. It’s the investor who is in and out of investment products, jumping on the hot stock or taking advantage of industry news that is reflected in the stock market. This is also the preferred strategy of 19 percent of investors, but most popular among Generation X investors who are making a dash toward creating their financial foundation for retirement.

It is imperative that an advisor recognize the strategy an investor chooses to use for the majority of investments. But it is also imperative for an advisor to recognize when an investor might be prepared to alter his or her strategy to match current needs or changing goals.