The Current Perception of Providers 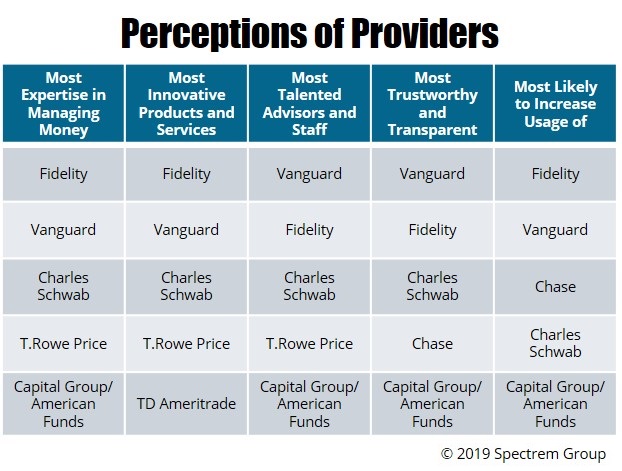 The key word is “perception”.

What matters is the perception wealthy investors have of the providers they use or don’t use to handle their investment affairs.

Spectrem annually asks investors to rate approximately 25 of the top financial providers in the country on a variety of performance matters. The perceptions matter, especially in light of continued governmental attention to regulation violations among financial providers. Any news story about issues related to regulation abuse or data breaches can impact investor perceptions.

The latest iteration of the providers list is in Spectrem’s study Asset Allocation, Portfolios and Perceptions of Providers, which asks thousands of investors to approve or disapprove of providers in five categories. As has been the case for a number of years, Fidelity and Vanguard split the top spot for each category, which includes “Most Expertise in Managing Money” and “Most Talented Advisors and Staff”.

In the 2018 study, Charles Schwab finished third in four of the five categories, surpassed by Chase for the third spot in “Most Likely to Increase Usage Of”. T.Rowe Price and Capital Group/American Funds were also often mentioned among the top five providers in the five categories (also including “Most Innovative Products and Services”, and “Most Trustworthy and Transparent”).

To get an idea how investors perceive these providers, when asked a yes-no question on whether a company “Offers Expertise In Managing Money”, 84 percent approved of Fidelity and Vanguard, and 11 of the 27 companies got approval by at least 70 percent of investors.

The interesting perception differences show up when the study is segmented by age, wealth and advisor dependency. For example, Chase beat out Fidelity and Vanguard among Millennials for “Most Innovative Products and Services” and “Most Likely to Increase Usage of”. Among World War II investors, Capital Group/American Funds found its way into the top three for “Most Expertise in Managing Money”, “Most Talented Advisors and Staff” and “Most Trustworthy and Transparent”.

The full report indicates the breadth of differences in perceptions of providers, and can detail for providers just where they fall short in terms of how investors look at them and the services they provide.