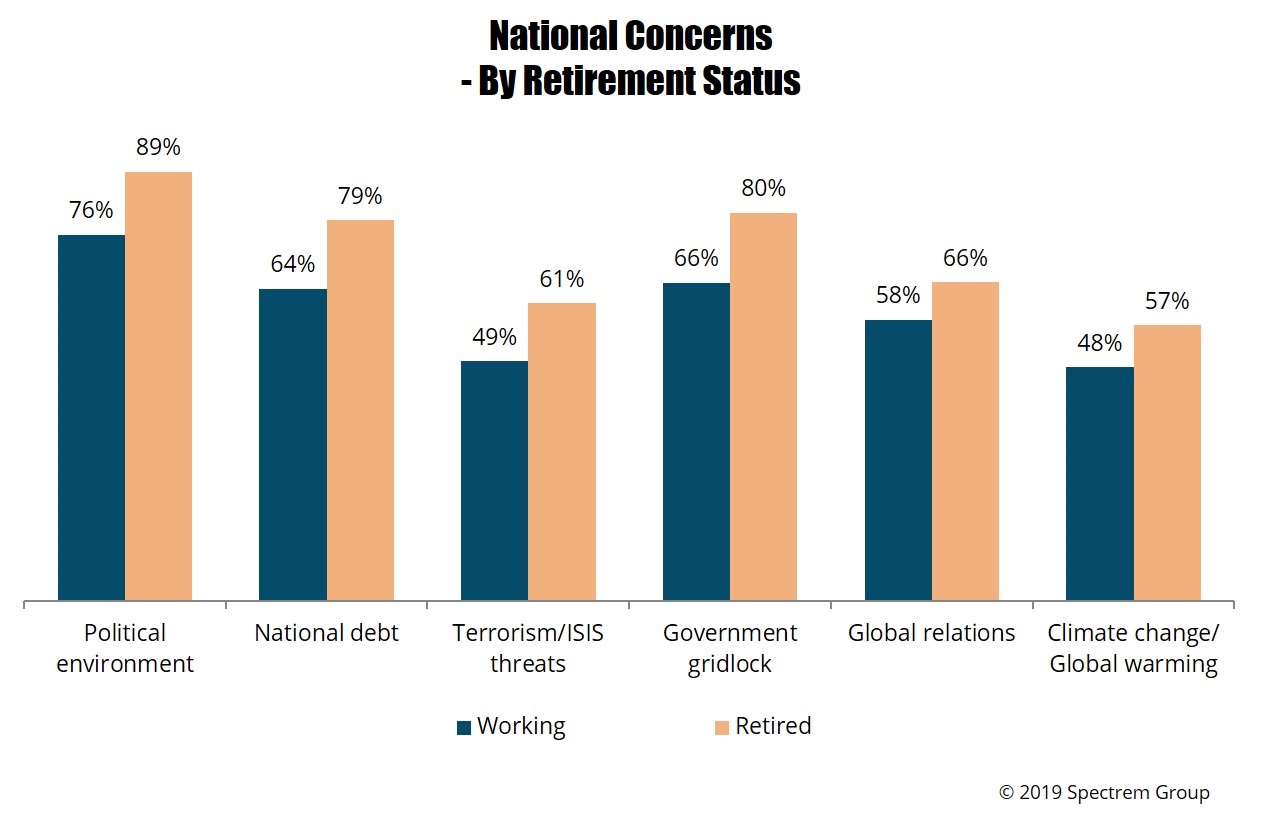 Retirement is generally a situation reserved for older citizens, and for most takes place after one’s 65th birthday. When people are 65 years old or older, their children are usually adults themselves. Retirees are no longer concerned with the financial details of paying for college educations. They are past many of the personal financial concerns that younger citizens have. Retirees have an entirely different set of concerns.

That point is driven home in Spectrem’s new study Evolving Investor Attitudes and Behaviors, which examines how investors with a net worth between $100,000 and $25 million feel about matters that involve investment strategies as well as matters that exist outside of the financial markets.

“This study best displays the reasons we segment studies based on the working status of investors," said Spectrem president George H. Walper Jr. “it’s true that portfolios can differ between working and retired investors, but that is expected. Often, the attitudes and behaviors of a retired investor differ from those of working investors in ways that might not be anticipated. The differences are often a matter of degrees, and sometimes that is pronounced.”

There are simple differences between the two segments based on working status, such as their use of a personal financial advisor (65 percent of retired investors to just 51 percent of working investors).

But the revealing information comes when investors were asked about their personal and national concerns. Simply put, retired investors have fewer personal concerns than do those investors who are still working. Much of it has to do with the fact that working investors tend to be younger, with younger children, and without the financial certainty that comes with accepting retirement as the next stage of your life.

With fewer financial concerns, retirees have time to consider the big picture, and are much more likely to have concerns over national issues than do working investors. Eighty-nine percent of retirees worry about the political environment in America, 79 percent worry about the national debt, and 80 percent worry about government gridlock. In all cases, that is more than a 10 percent greater level of concern than among working investors.

Talk about big picture concerns – 66 percent of retired investors express concern over global relations between the United States and countries from around the world. Only 58 percent of working investors have time to consider that all-consuming issue.

Advisors need to know what is causing his or her client’s furrowed brow. Concerns may not be eliminated, but they can be alleviated, especially if they have a financial basis. Advisors can assist in decreasing concern over financial issues, but only if the investor is willing to share their level of concern.

They are more likely to share their concerns if they are asked about them. So, don’t forget to ask.