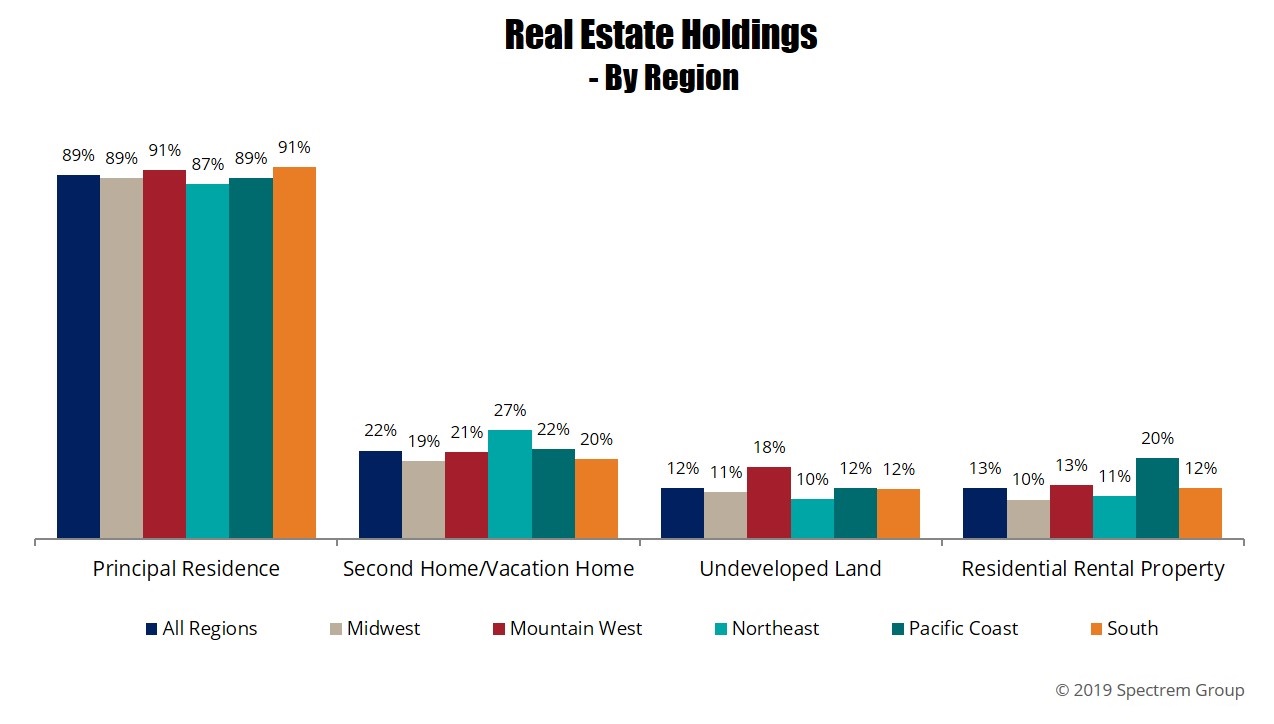 Much of the beauty of the United States stems from its size. From a purely geographic standpoint, the United States is one of the most diverse nations in the world, with coastal communities and landlocked towns, mountainous regions and deserts, and places both cold and warm.

But there are differences, based on regional status, in how investors invest their money. Spectrem’s study Regional Influences on Investor Decisions not only looks at investors from five specific regions of the country but also compares those investors to each other to determine which areas promote one type of investment over another.

“Regional differences in Americans are highlighted in politics, entertainment and advertising, so it makes sense that there are differences in investing habits based on regional biases," said Spectrem president George H. Walper Jr. “Property is obviously going to be a different matter based on land values and population, but the differences exist in other areas of investment ownership as well.”

Why does that difference exist? Probably because Pacific Coast investors claim 18 percent of their total assets reside in their residence, as property values soar in California, the Pacific Northwest and Hawaii. That compares to only 8 percent of total assets for Midwestern investors placed in their principal residence.

There are numerous financial considerations based on home ownership, including tax matters and permanence. For some investors, the personal financial cost of owning home remains steady for decades, while for others, a principal residence can change based on family or work details. Advisors should consider the regional influence of property ownership on an investor.

The matter of property values and availability impacts ownership, as does the value of investing in real estate as an income-generating asset. According to Regional Influences on Investor Decisions, 20 percent of investors from the Pacific Coast states (California, Oregon, Washington, Hawaii and Alaska) own residential rental property. Ownership of such property would be a huge income-generating proposition in most of California, especially in the northern portion, and is also significant in the Northeast, where the concentration of population makes rental properties valuable.

Thirteen percent of investors from the Northeast own residential rental property, above the level of ownership in the Midwest, Mountain West or South. There are also sizable differences in the amount of money investors have invested in these types of properties, based on regional averages.

The regional study was designed to instruct advisors on differences in investment attitudes and behaviors based on the geographic location of investors, and the difference is perhaps greatest in terms of property ownership.

Advisors can inform themselves regarding the investment leans of investors from one part of the country in order to direct investment proposals related to topics of geographic difference.