Pick Your Poison - The Stock Market or The Political Climate 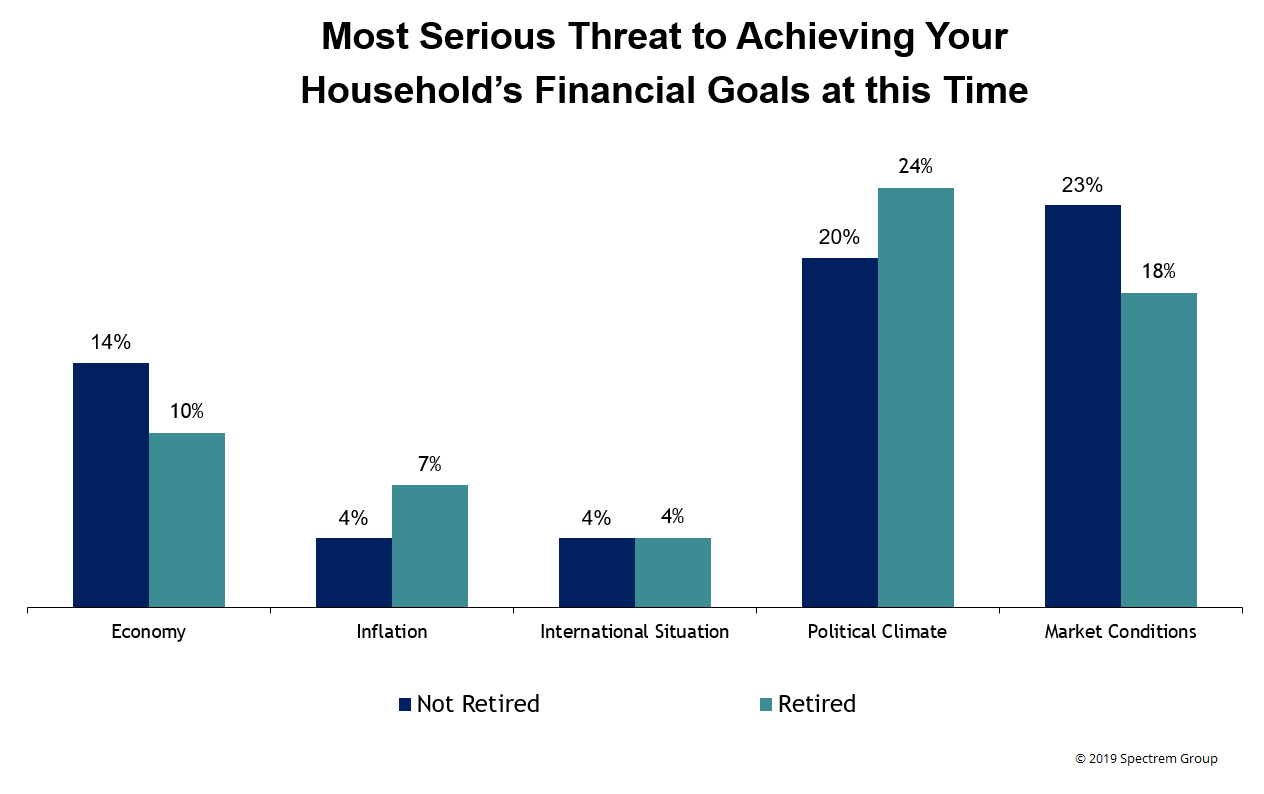 It’s a question of which carries greater weight, concern over the stock market decline or the political infighting, but both are seen as hindrances to the financial goals of American investors.

As part of Spectrem’s monthly Investor Confidence Index survey, investors are asked to respond to one open-ended question, and in December the question was “What is the most serious threat to achieving your household’s financial goals at this time?” More than 40 percent of investors split their answers between market conditions (22 percent) and the nation’s political environment (20 percent).

In both cases, there was a sizable increase in responses from the last time that question was asked in September 2018. At that point, the economy was considered a similar threat to political climate and the stock market.

The political conflicts in the United States have worsened over the past decade and have reached the point where President Donald Trump and Democratic leaders get into an open argument before an audience of reporters and the nation in a live meeting from the White House.

But the stock market really hit the skids in December, and during the five days in the middle of the month when investors were being surveyed for the Spectrem Confidence Index, the Dow Jones Industrial Average fell more than 2,000 points.

Blame for the stock market slide centers on negotiations with China over a trade deal, with the threat of tariffs from both sides and the U.S. government promising protections to American farmers to provide funds lost in the trade war.

But at the time of the survey, many economic forecasters were sending up early warning signs about the threat of a recession. One week after the survey, the Federal Reserve was ready to announce its intentions related to the benchmark interest rate, with investor fears that another quarter-point might be added to combat inflation. That action actually occurred Dec. 19, bringing credence to those fears.

The situation related to China, Saudi Arabia, Mexico and Canada, and Europe remain in flux as well, but investors were only allowed to provide one response, so international concerns was only selected by 4 percent of investors.

As might be expected, Millionaires had a slightly greater concern (24 percent) about the stock market than non-Millionaires (22 percent). Based on the working status of investors, 14 percent of working investors said the economy as a whole was their greatest threat, while 24 percent of retired investors listed the political climate as the No. 1 issue.