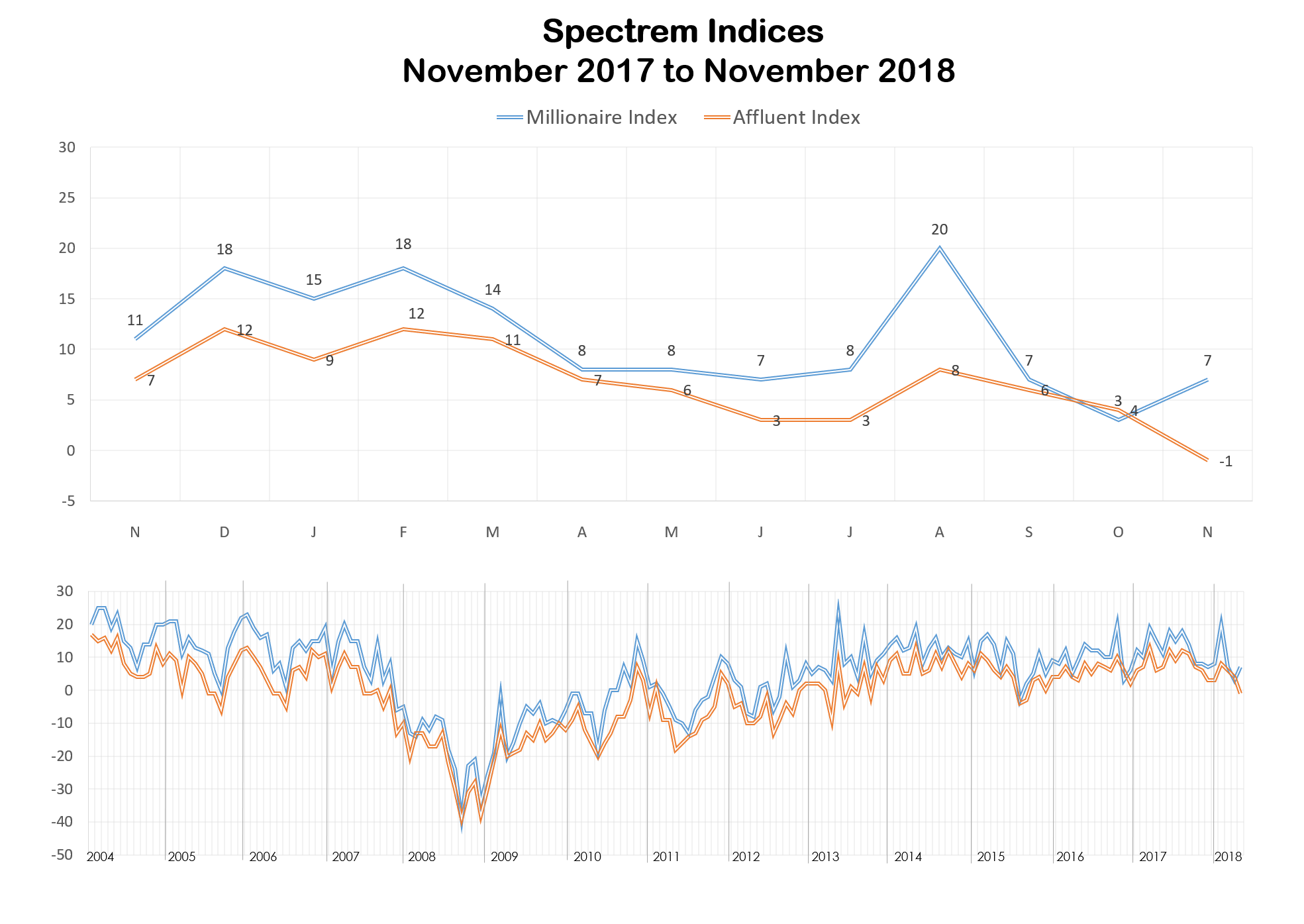 Although Millionaires backed off Stock and Stock Mutual Fund investing in November, they also showed a reduced interest in Individual Bond, Bond Mutual Fund and Cash investing, which explains a portion of the rise in the SMICI to 7, the mark it reached in September. At the same time, Millionaires reported a higher Household Outlook in November, which also causes the overall index to rise.

Meanwhile, the SAICI, which includes both Millionaires and Non-Millionaires, dropped to -1, the first time below the zero mark since sitting at -3 in February of 2016. Because the Non-Millionaires reported a lower Outlook for most components, the overall SAICI dropped in comparison to the rise in the SMICI.

In November, the nation watched as the House of Representatives turned to a Democratic majority, although that majority does not go into power until January. At the same time, the Senate gained Republican seats, which could be a buoy for conservatives and business leaders who support Republican economic points of view.

Balancing that optimism was the three-day run during Thanksgiving week when the Dow Jones Industrial Average lost more than 1,000 points. By the end of the month, when the investor survey was conducted, the Dow had recovered much of those losses.

Those Not Investing, the percentage of investors who state their intention to either maintain their current level of investing or decrease it, rose among Millionaires to 36.6 percent, the highest level of the year, and rose to 55.2 percent among Non-Millionaires, the first time over 50 percent since July of 2017 and the highest level of non-participation since December of 2013.

The Spectrem Household Outlook, a measure of the long-term confidence among investors in four financial factors which impact a household’s daily life, dropped overall to 13.80, a two-month decrease from the mark of 30.2 in September. But that was driven by a drop in Outlook among Non-Millionaires (from 21.52 to 8.84) while Millionaires reported an increase In Outlook from 13.67 to 18.10. However, Millionaire Outlook stood at well over 30 for half the year.

Overall, the four components of the Outlook fell, although none fell dramatically. Among Millionaires, the Outlook for Household Assets reached 41.79, a 6-point rebound.