It's Not True: Inheritors Don't Splurge 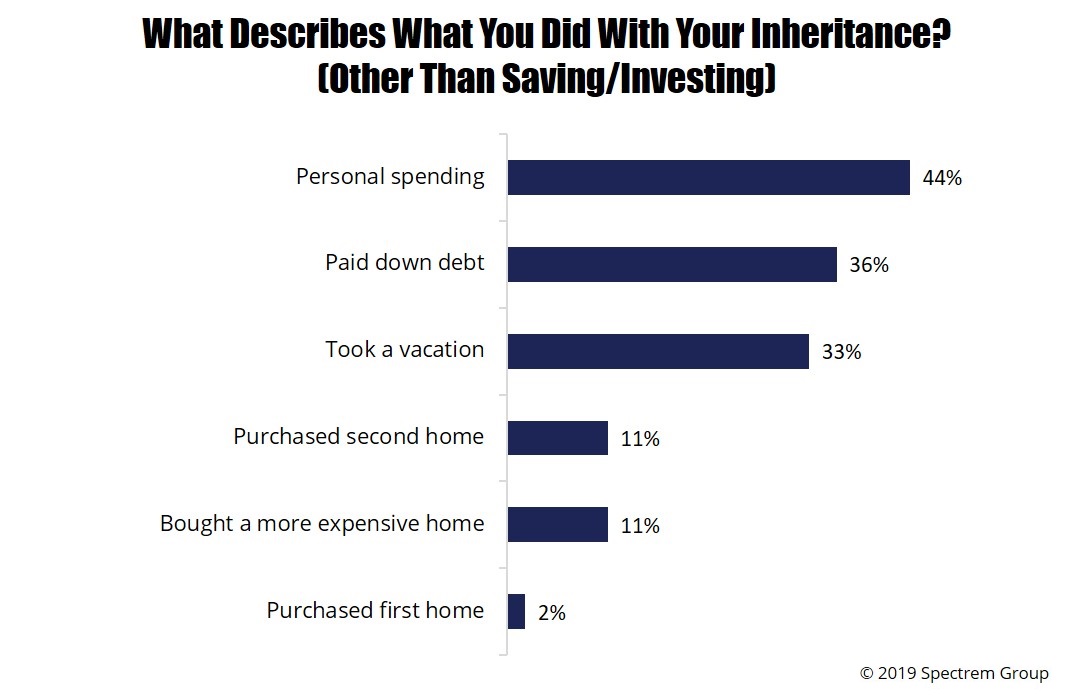 You’ve seen in movies or TV shows, where a person receives an extravagant inheritance and runs out to buy everything they ever wanted in life – including a pony.

But the reality is that most people who inherit large sums usually make intelligent, responsible, rational decisions.

According to Spectrem’s study Legacy 2.0: Baby Boomers and Inheritances, 60 percent of Baby Boomers who inherited at least $500,000 either invested the money or put it in an account that could be used by their children or grandchildren someday.

Not exactly the wild and crazy activity most often associated with an inheritance.

That 60 percent did not include those inheritors who smartly chose to pay down debt with a portion of their inheritance (36 percent), or purchased a home (24 percent). But one-third of those not only saving or investing their money used some of their inheritance for a personal vacation, and 44 percent used it for personal spending.

So some inheritors do take advantage of an inheritance to splurge.

Amusingly, the inheritors were asked how their inheritance impacted their lifestyle. Among those investors who only invested or saved the money, their lifestyle was completely unaffected, rated at 14.75 on a 100-point scale, one of the lowest ratings of any topic studied by Spectrem. Of those who made other decisions with the money, they rated the lifestyle change at 32.94, which is not a significant number alone, but is notable by comparison.

Did these inheritors make their inheritance decisions on their own? More than 40 percent did not, no matter what decisions they made. But of those who did something other than save or invest their inheritance, 31 percent got advice from the advisor that handled the distribution of the inheritance, while 39 percent of them met with their own financial advisor.

But an advisor can only do so much in terms of giving advice. An inheritor wanting to use inheritance in order to go on a cruise probably did not get that advice from their advisor.

The study also tells what inheritors do when the inheritance comes as a surprise. Those are the people who are going to really let the cash fly, correct?

Keeping in mind the people surveyed for the study are Baby Boomers who may have already sown their wild oats, only 15 percent chose to spend a portion of their inheritance on a vacation, and only 9 percent used it for personal spending. Those responses were similar to those from investors for whom the inheritance was anticipated.

The opportunity to take care of financial matters seems to be the focus of inheritors who suddenly come into a sizable amount of money. But those inheritors can also benefit from some instruction from advisors about how best to save or invest that sum in relation to the portfolio that exists at the time of the inheritance.