It's Not Just the Economy 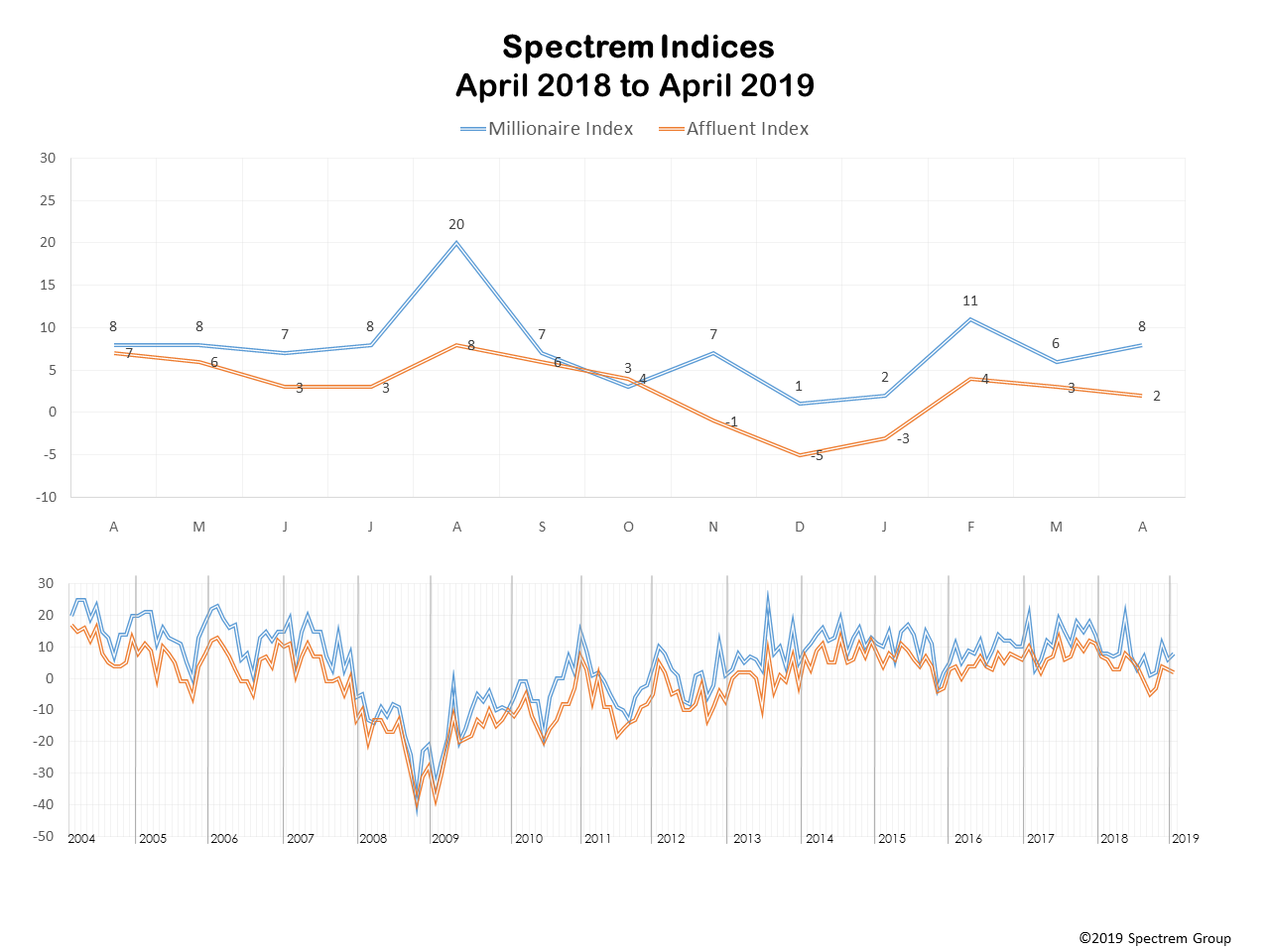 When considering investor confidence, it’s not just about the economy, or more specifically about the stock market. Otherwise, the Spectrem indices would reflect the fact that the NASDAQ and S&P 500 both hit record highs on April 23, unemployment remains historically low, and corporate earnings are coming back strong.

There is something else afoot in the minds of investors, as determined by the Spectrem Investor Confidence Indices for April.

There was very little movement in either the Spectrem Millionaire Investor Confidence Index or the Spectrem Affluent Investor Confidence Index in April, but the percentages for investor interest in investing were almost all down from March. The SMICI moved up by 2 points to 8, but remained in single digits for the second consecutive month. For comparison’s sake, the SMICI was in double digits for nine consecutive months from July 2017 to March 2018 but has been in single digits for 11 of the 13 months since.

The SAICI regularly reports a lower level of confidence, and in April it dropped 1 point to 2, but stayed in positive territory for the third straight month.

The monthly SAICI tracks changes in investment sentiment among the 17 million households in America with more than $500,000 of investable assets. The SMICI reflects the investment sentiment of households with more than $1 million in investable assets. The Spectrem Confidence Indices were fielded from April 17 to April 23, 2019.

While the stock market soared in April, other factors played into the attitude of investors, including the ongoing debate about whether the Mueller report into Russian influence on the 2016 election exonerated President Donald Trump or pointed to numerous acts which could be defined as obstruction of justice into the probe. Neither factor appeared to carry greater weight as investors effectively pulled away from a market that set records on April 23.

Among all investors, investing interest dropped in all categories while those Not Investing climbed by more than 10 percent to 42.4 percent. The only increases in interest when segmenting by investor wealth was an increase in stock investing among Millionaires by 4.5 percent and an increase in bond mutual fund investing among non-Millionaires by 1 point. In the case of both individual bond and bond mutual fund investing, interest among non-Millionaires exceeded interest among Millionaires, which rarely happens in any category in the 15 years of the Spectrem indices.

Spectrem’s Household Outlook, a measure of the long-term confidence among investors in four financial factors which impact a household’s daily life, barely moved from March numbers, and ratings among the four categories – Household Income, Household Assets, Company Health and Economy – all remained within a point of the previous month’s rating. However, the Outlook among non-Millionaires actually rose in most categories, indicating that the drop among Millionaires was more impactful than the slight increase among non-Millionaires.