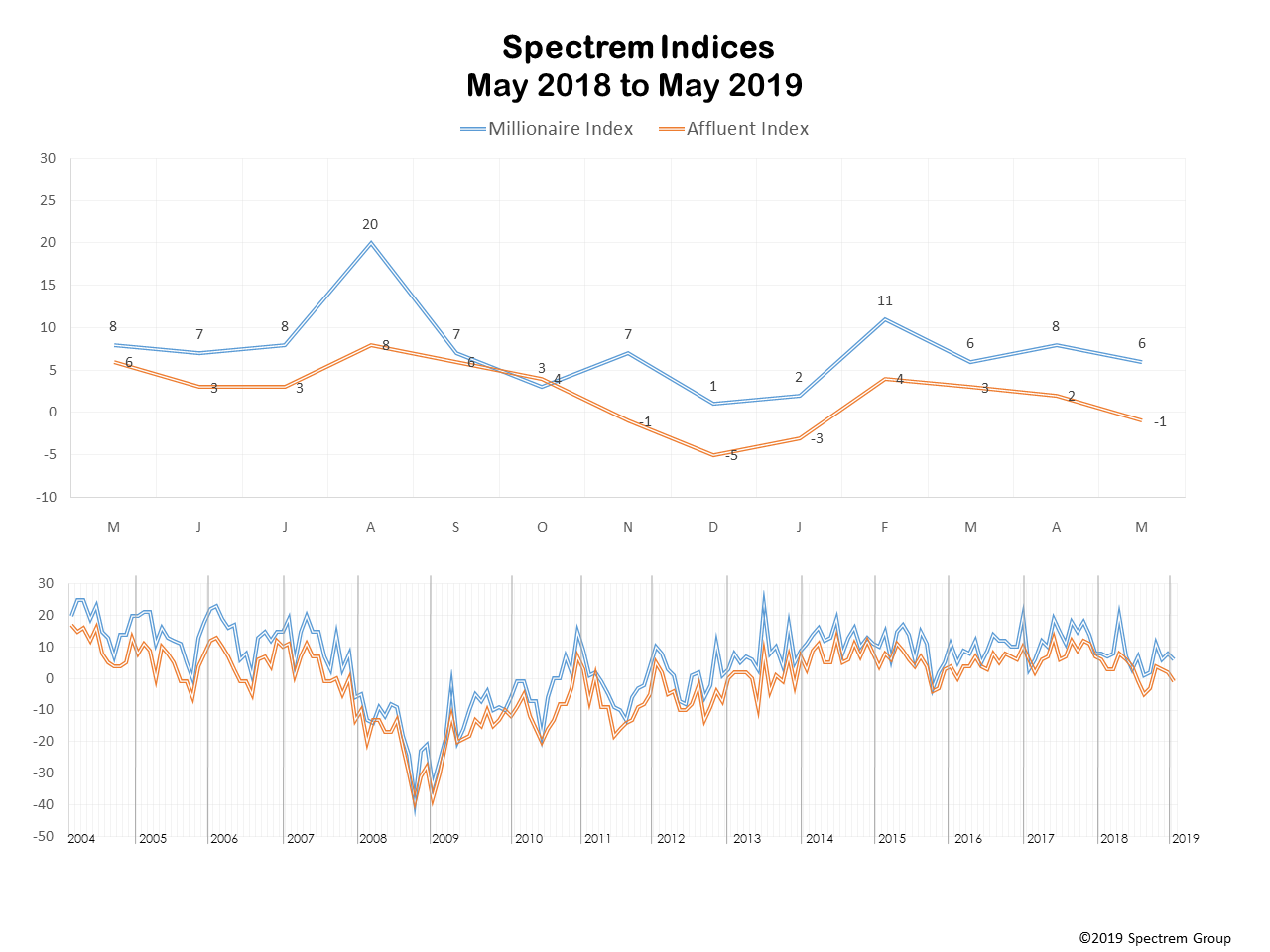 The back-and-forth between the United States and China regarding trade restrictions and tariffs ramped up in May, and investors watched the lack of progress with great interest. Statements, both positive and negative, from U.S. President Donald Trump and Chinese President Xi Jinping caused the stock market to bounce one way or another, and investor confidence was affected almost daily.

In the month of May, both the Spectrem Millionaire Investor Confidence Index and the Spectrem Affluent Investor Confidence Index recorded slight drops, indicating a continued concern among investors about the long-term stability of the stock market results. The SMICI dropped 2 points to 6 as fewer investors showed an interest in investing in individual stocks. The SAICI fell back into negative territory from 2 to -1, and has not been above a register of 4 since September of 2018.

The monthly SAICI tracks changes in investment sentiment among the 17 million households in America with more than $500,000 of investable assets. The SMICI reflects the investment sentiment of households with more than $1 million in investable assets. In May, the Spectrem Confidence Indices were fielded from May 17-May 23, 2019. During that time, the Dow Jones Industrial Average stayed above 25,500, although it recorded a loss of more than 300 points total on the last two days of the fielding period.

While both indices recorded losses, among all investors there was an increased interest in investing in all categories of products other than individual stocks. Interest in individual bonds more than doubled from 5.20 to 11.20.

Among non-Millionaires, investing interests were similar to levels in April, although individual stock investing fell sharply from 22.3 to 15.8 percent. Those not investing, the investors who express no plans to add to any allocations, rose to 53.5 percent, the highest level since December.

Spectrem’s Household Outlook, a measure of the long-term confidence among investors in four financial factors which impact a household’s daily life, rose slightly in May, but the Outlook has barely moved in the last four months after it nearly doubled from 10.90 to 21.10 in February. The Outlook appears to be both stable and unaffected one way or the other by current economic conditions. The Outlook for the economy among all investors rose from 1.20 to 3.60, a positive sign after spending five months in negative territory from October 2018 to February 2019.