By the time March rolls around, most New Year’s resolutions are forgotten. Diet plans go by the wayside at the first mention of pizza, and exercise intentions die when one’s daily schedule weighs too heavily upon a person’s energy level.

But financial resolutions do not need to suffer the same fate.

There are occasions that come along in an investor’s life that require reexamination of investment priorities and performances. Birthdays are a great example; when an investor hits the magic 30, 40, 50 or 60, suddenly investment intentions change, and investors sit down with their advisor to discuss the past and the future. 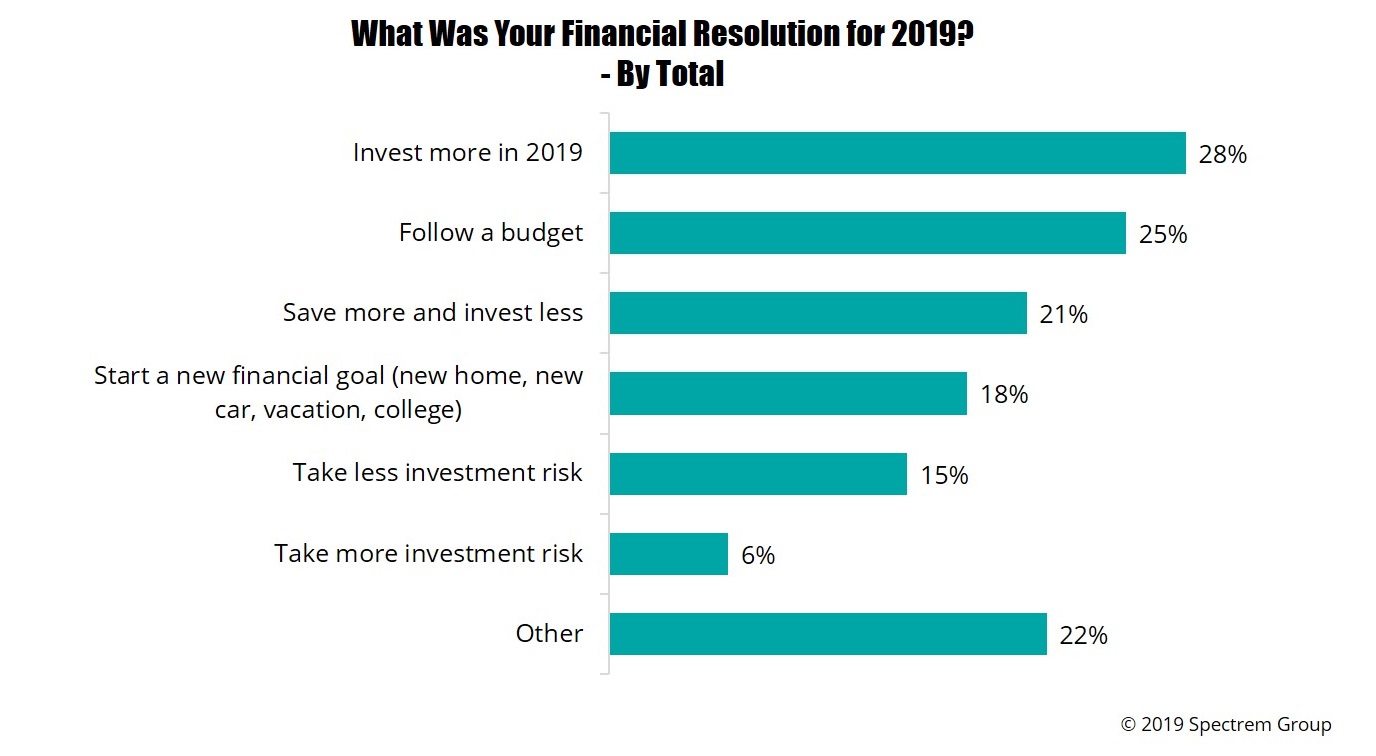 The same can be said about New Year’s Day. The practice of adopting a New Year’s resolution is time-honored, and when that resolution is based on financial matters, those resolutions have the opportunity to last a long time. They are certainly defined as a way to change financial decision-making over time, and their effects are aimed at long-term impact.

The good aspect of financial resolutions is that they can be checked on occasion, and that occasion may be frequent, depending on the severity of the resolution and the goal which that resolution was set to meet.

Spectrem surveyed 900 wealthy investors in January and found that only 11 percent of them made financially-based resolutions to start 2019. Of course, on New Year’s Day, 2019, the U.S. government was in the throes of a partial shutdown over President Donald Trump’s request for funds to build a border wall between the United States and Mexico, and the previous year had just wrapped with a month-long decline in the Dow Jones Industrial Average that eventually saw 4,000 points erased in a three-week period.

All things considered and reflecting on those two occurrences, more investors might have been wise to reevaluate their investments at the turn of the calendar. That being said, another Spectrem survey of investors found that two-thirds of investors received a call from their advisor during the tumultuous month of December and 70 percent of those investors were told by their advisor to make no changes in their investment strategies and allocations.

So perhaps it is advisors who prevent investors from making New Year’s Day financial resolutions.

But the Spectrem survey of investors who made financial resolutions on New Year’s Day showed some positive results for advisors to consider. Of those investors who made resolutions, 28 percent said they decided to invest more in the coming year. On the other side of the coin, 21 percent of investors said they planned to save more and invest less. That plan may have come after investors held their collective breath through the freefall of December 2018.

Twenty-five percent said they were going to follow a budget in 2019, which makes you wonder how many times those investors have made that pledge in their lifetimes.

Advisors should also note that among those investors who said they made financial resolutions for 2019, 52 percent said they planned to share their resolution with someone who could help them achieve their goals, and that someone was more often than not their personal financial advisor (64 percent).

That’s the key point about financial resolutions, no matter when they occur. Unlike weight loss pledges, investors often do have someone whose job it is to check on their investment preferences from time to time. If an investor alerts their advisor that they want 2019 to be different from 2018 from some key investment aspect, that advisor can discuss the resolution with the investor on a regular basis to see if the plan still makes sense and if the investor likes the direction the change produced.

Of the investors surveyed by Spectrem, 9 percent said they made financial resolutions at the beginning of 2018, and 92 percent of those investors maintained their resolution throughout 2018.

A New Year’s Day financial resolution is a construct of the calendar, and it is sort of a trick. It certainly works that way with weight loss and exercise. But financial resolutions serve a significant purpose, are easily tracked, and the value is easily determined.