There are few topics more difficult to discuss with close family and friends than money and finances. Even when there is enough money to go around, often the topic creates pressures and conflicts that lie under the surface of the relationship.

But family therapists widely agree that open conversation about important matters can dispel conflicts. It’s simply better to have frank discussions, bringing controversial topics out into the open where they can be dissected, simplified and perhaps alleviated.

In that regard, Spectrem research often asks investors to describe the level of family involvement in their financial and investment decisions, examining just how aware family members are about financial specifics. The results of the research can be surprising.

That is certainly the case in the research completed for our new study Legacy 2.0: Baby Boomers and Inheritances. The study was conducted with people from the Baby Boomer generation who inherited at least $500,000 and have a net worth of over $1 million. They were asked about the process of receiving their inheritance and their plans for creating an inheritance of their own to pass on to their family and friends. 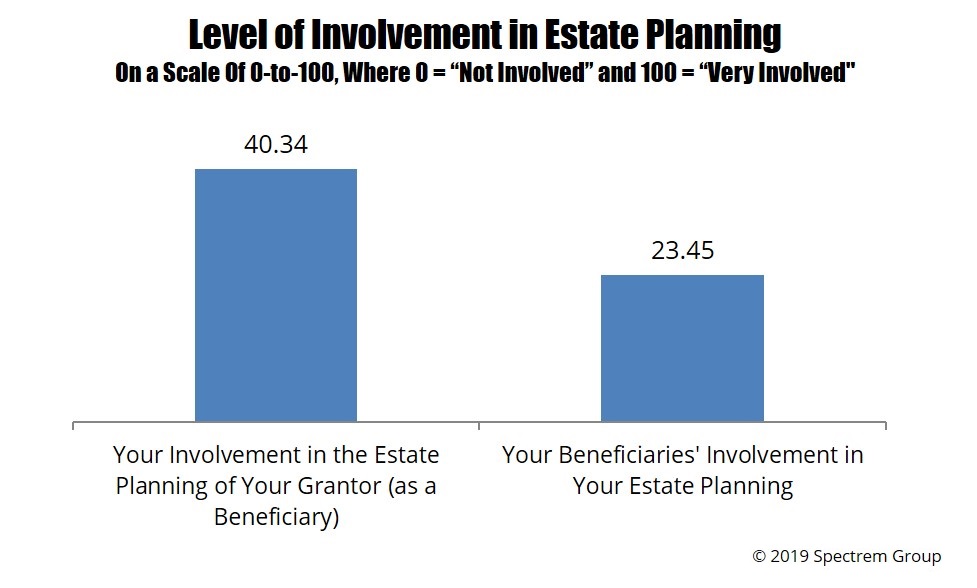 The topic produces numerous stimulating points about the transfer of wealth, which is a major consideration for affluent investors in the Baby Boomer generation, who are currently preparing their own sizable assets for distribution among beneficiaries. But one of the more surprising results from the study was that family involvement in the process of receiving or granting an inheritance is not nearly as widespread as one might expect.

As with all viable research, this point raises the question “Why not?” Why exclude family from a process that is going to have a significant impact on their financial futures?

It is a question advisors should be discussing with their clients as they plan wealth transfer, make estate plans or establish trusts for the purposes of distributing assets.

Of course, “involvement" can mean many different things, and there may be some question whether beneficiaries need to play a role of any sort in deciding how an inheritance is going to be distributed.

But there are issues that make inheritance complicated, including tax ramifications and the processing of illiquid assets. The study discusses the impact of both of those topics, but might be a topic of conversation between the benefactor and the beneficiary as decisions are being made.

For advisors, the point is that your clients who have established or are working to establish a wealth transfer plan might want to have conversations with their beneficiaries about those topics and others. Have they done so? If not, why not? It’s a fair question for advisors to ask, especially if the Baby Boomer clients are concerned about any conflicts that might arise in the wealth transfer.

One of the follow-up questions was whether these inheritors are involving their own beneficiaries in the decision-making processes related to their own wealth transfer, and the answer is a resounding “not so much”. Asked to rate involvement of their own beneficiaries in their estate planning on a 100-point scale, these Baby Boomer inheritors rated it at 23.45, which is a very low level of family involvement.

As stated previously, there may be very good reasons for not involving the family in matters related to the eventual wealth transfer. However, there are also good reasons for making sure beneficiaries understand what will someday occur, and provide them with details that they will need when the time comes.

Advisors and investors should decide the appropriate level of family involvement with an eye toward making the inheritance process as smooth as possible.