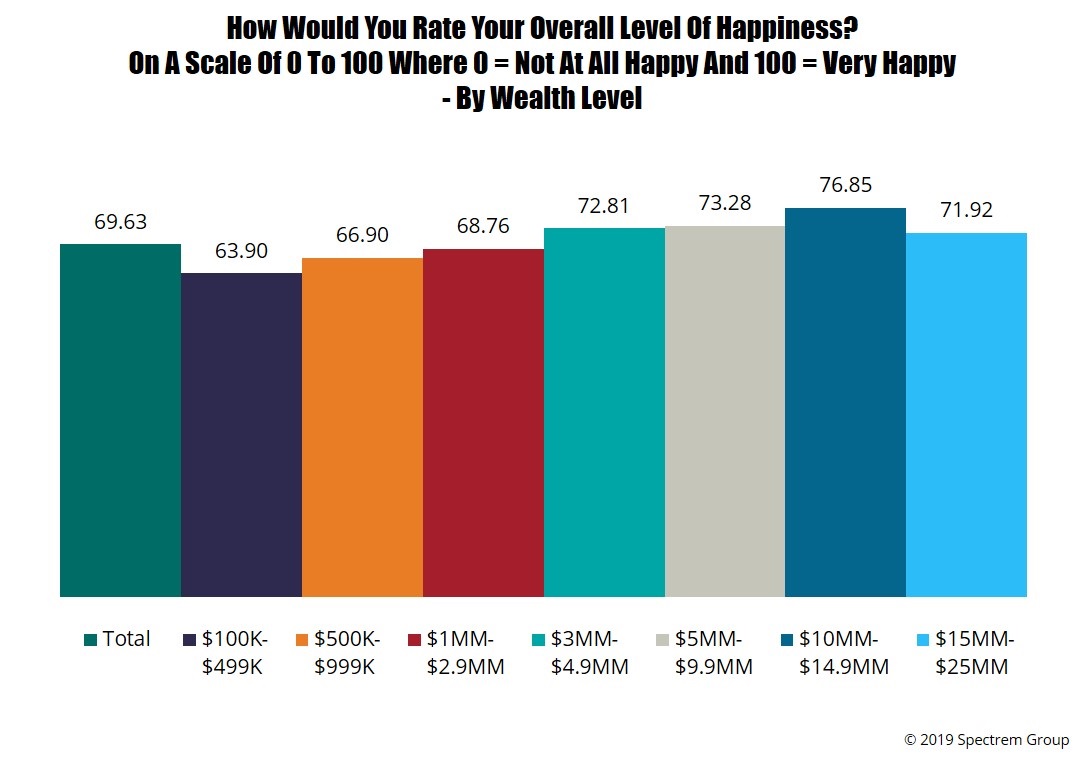 When a person is asked “Are you happy?”, it may be easy to answer in the affirmative or the negative. But putting one’s happiness on a scale provides a more detailed response.

Spectrem asked 700 wealthy investors to rate their level of happiness on a 0-to-100 scale and the overall score arrived at 69.63. That is a relatively high level of happiness, and reflects the possibility that living at a certain level of financial success can produce happiness in an American citizen.

There is further proof. When the investors were segmented by wealth, the greater the level of wealth, the greater the level of happiness. Among investors with a net worth between $100,000 and $500,000 (not including the value of the primary residence), the happiness rating was 63.80, but when the investor had a net worth between $10 million and $15 million, the happiness rating reached 76.85.

Except that investors with a net worth between $15 million and $25 million rated their happiness at 71.92, well below investors in the range of $3 million to $15 million in net worth.

So that’s it, right? Great wealth can negatively impact happiness.

So that’s it, right? Great wealth can negatively impact one’s happiness with their financial situation.

Does having too much money negatively impact happiness?

There may be an answer to that question within the other questions asked in the Spectrem study. Asked to rate their level of happiness with their relationship with their children, the rating followed the same trend that greater wealth produced grater family relationships (60.36 to 79.25) until the $15 million-$25 million investors responded with a rating of 58.56, the lowest rating of them all.

There is a story there, to be certain.

For the lower wealth levels, an improved salary at work (36 percent), and less personal debt (28 percent) matched or exceeded a greater rate of return (28 percent) as an ingredient to greater happiness.